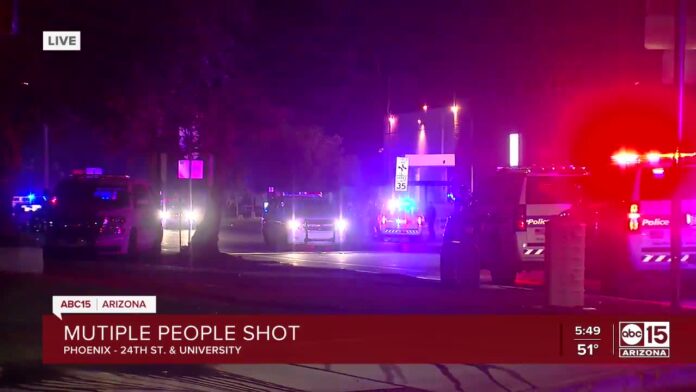 phoenix AP – One person is dead and 11 others injured after separate early-morning shootings at a Phoenix strip mall and outside an after-hours dance hall, police said.

It’s still unclear if the shootings were related. They occurred two hours apart and at locations nearly 14 miles apart.

Officers responded to the dance hall scene about 5 a.m. and said one person was declared dead at the scene and six other victims were located and transported to hospitals by Phoenix Fire Department crews.

The gender of the person killed wasn’t immediately released and police said two of the five wounded men were in critical condition in the shootings that escalated from a fight.

Two hours earlier, police said five men were shot and wounded at a Phoenix strip mall. Three were transported to a hospital for treatment of gunshot wounds an two other men were also admitted.

Police said preliminary information indicates the men were in a fight and exchanged gunfire.

They say all five are expected to survive.