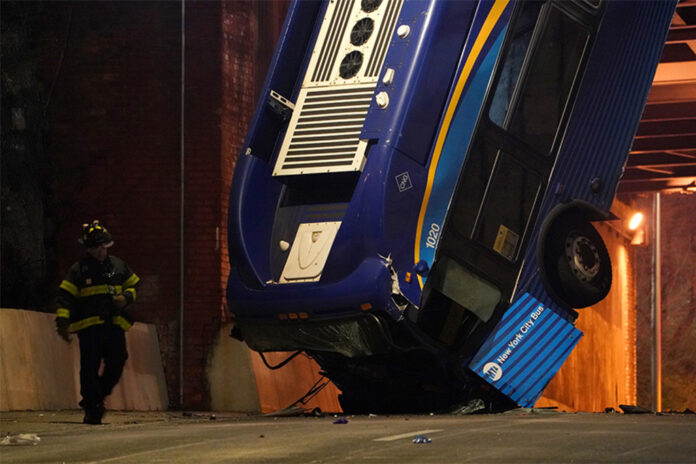 Authorities said the MTA bus driver lost control of the vehicle and drove off the Bronx Bridge in an accident that injured at least eight people Thursday night.

The terrible accident occurred at around 11:10 p.m. According to MTA sources, the Bx35 bus driver was trying to turn left from University Street onto a ramp onto the Washington Bridge.

But the driver veered off the lane, causing the bus to crash off the high road.

The front of the bus landed flat on the front windshield on a portion of the Bronx Crossway, while the rear remained stationary on University Street.

The Department of National Defense in New York said one of the victims was seriously injured, while the others were considered non-life threatening and slight.

Witness Brian Garcia said he was inside his apartment when he saw the bus drive off the road.

Then he said, “I heard a big boom, a collapse. I heard people from the bus screaming for help.”

Once Garcia got out, he said first responders were already saving people from the bus.

It was not immediately clear whether the people on the bus had all the casualties.

The New York Department of National Defense said the victims were all taken to area hospitals.