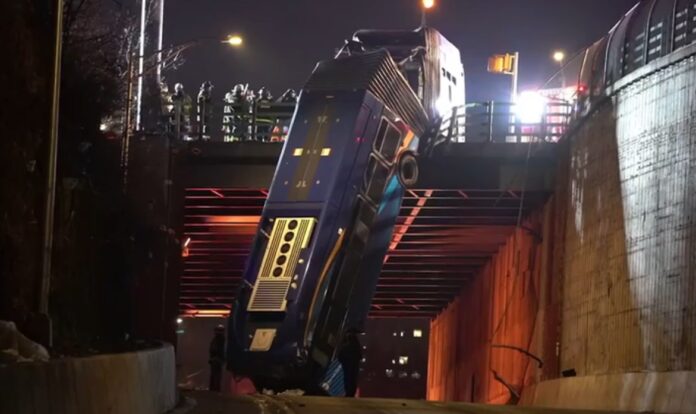 Eight people were injured after an accordion-style bus in New York City veered off the road, half hanging from a bridge.

A police spokesman said the BX-35 bus driver “was unable to navigate on the road and got off the road” near Cross Bronx Expressway and University Avenue around 11 p.m. No other cars participated and no one was arrested.

One of the wounded was a passenger with the driver. They were taken to hospitals with minor injuries, according to police and MTA spokesperson Tim Menton. The driver sustained the most severe injury to his jaw, but he is in stable condition.

Their injuries were consistent with falls from about 50 feet, according to FDNY Vice President Paul Hooper who oversaw the emergency medical treatment.

Menton said it’s too early to speculate on why. He said the bus driver’s path calls a left on the highway but for whatever reason, the bus missed the turn. Police said the accident appeared to be an accident and the driver was not disabled.

Videos from the Citizen app show the massive police response to the scene and many people gather to take pictures and videos.

Delays were expected in the area until the crane could remove the bus from the bridge.

“We are currently making sure that all fuel and other hazardous materials are secured inside the vehicle so the bus can be towed on the road,” said Stephen Moore, Acting Battalion Commander at FDNY.

The transport authority said in a statement that it was conducting a full investigation.