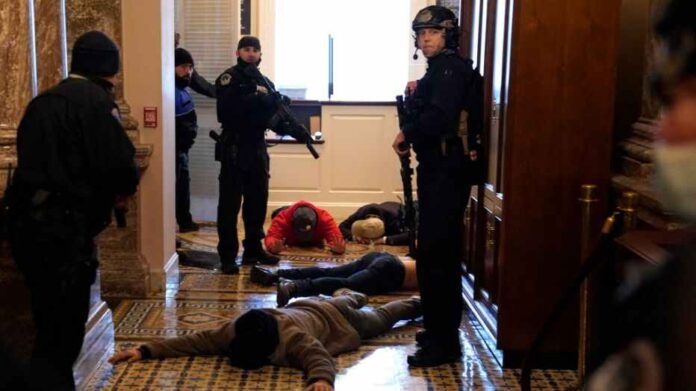 WASHINGTON (AP) – The U.S. Capitol locked down before being secured once again on Wednesday after protesters breached barricades and broke windows amid violent clashes between President Donald Trump’s supporters and Capitol police.

Both chambers of Congress abruptly recessed as they were debating the Electoral College vote that gave Joe Biden the presidency.

One person died after being shot at the U.S. Capitol, FOX 5 DC confirmed, as scores of supporters of Trump stormed the building. The exact circumstances surrounding the shooting were unclear.

The district’s police chief said at least 13 people were arrested, and five firearms had been recovered during the protests. They added that protesters deployed ‘chemical irritants on police’ to gain access to US Capitol.

There was confusion in the House chamber as the Capitol doors were locked and debate was suspended. A representative from the Capitol police spoke from a lectern on the dais and told lawmakers to remain calm, and that more information would be available soon.

Shortly after, as protesters continued to breach the nation’s Capitol, members of Congress inside the House chamber were told by police to put on gas masks after tear gas was dispersed in the Capitol Rotunda amid police skirmishes with supporters of Trump

An announcement was played inside the Capitol as lawmakers were meeting and expected to vote to affirm Biden’s victory. Due to an “external security threat,” no one could enter or exit the Capitol complex, the recording said.

The skirmishes occurred outside in the very spot where president-elect Biden will be inaugurated in just two weeks.

A suspicious package was also reported in the area, Capitol Police said.

Pentagon spokesperson Jonathan Hoffman said Wednesday afternoon that defense leaders have been in contact with the city and congressional leadership.

A defense official said all 1,100 of the D.C. Guard were being activated and sent to the city’s armory. The Guard forces will be used at checkpoints and for other similar duties and could also help in the enforcement of the 6 p.m. curfew being implemented tonight in the city.

The skirmishes between protesters and police came shortly after Trump addressed thousands of his supporters, riling up the crowd with his unfounded claims of election fraud at a rally near the White House on Wednesday ahead of Congress’ joint session to count the Electoral College votes.

“We will not let them silence your voices,” Trump told the protesters, who had lined up before sunrise to get a prime position to hear the president.

After egging on protesters, Trump tweeted to his supporters to “stay peaceful” as they violently clash with law enforcement and breached the Capitol building.

Shortly after, the president tweeted, “I am asking for everyone at the U.S. Capitol to remain peaceful. No Violence! Remember, WE are the Party of Law & Order – respect the Law and our great men and women in Blue.”

“The violence and destruction taking place at the US Capitol Must Stop and it Must Stop Now. Anyone involved must respect Law Enforcement officers and immediately leave the building,” Pence tweeted.

The president’s son, Eric Trump, also tweeted about the actions of his father’s supporters.

“We are the party of Law & Order – prosecute anyone who crosses that line to the fullest extent of the law,” He wrote on Twitter.

In the video, the president maintained his false claim that the 2020 election result was fraudulent.
“You have to go home now,” the president said. “Go home in peace.”

A few hours after posting a video urging protesters to go home, Trump followed up with another tweet continuing to push unfounded claims of election fraud.

“These are the things and events that happen when a sacred landslide election victory is so unceremoniously & viciously stripped away from great patriots who have been badly & unfairly treated for so long,” Trump tweeted.