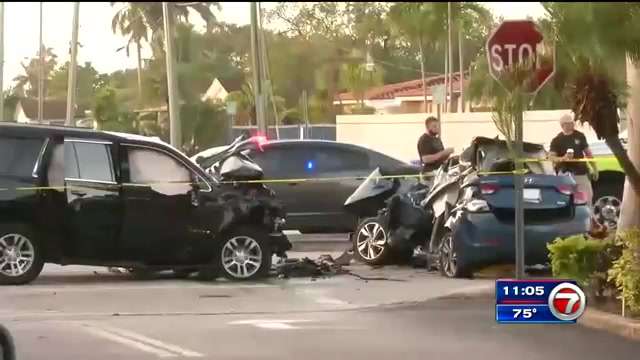 A crash in West Miami-Dade killed four adults and three teenagers in hospital.

According to FHP, the car with four adults attempted to turn left onto Flagler Street when it was hit by the car in which the three teenagers were in.

“When Hyundai entered the intersection, the front of the Tahoe hit the left side of Hyundai,” said Sanchez.

The death of the big four was announced at the scene.

Three 16-year-olds were taken to Kendall Regional Medical Center with injuries deemed not to be life-threatening.

“A firefighter from Miami-Dade confirmed that all four Hyundai passengers perished at the scene – one adult woman and three adult males,” Sanchez said.

Since then, family members of the victims have placed candles at the scene.

A large crowd gathered on Friday evening to commemorate those who died in the accident.

Police are investigating whether drugs, alcohol or speeding may have played a role.

The investigators did not reveal the names of the victims.

A 5-year-old child died at an Oak Brook wedding after the table fell on...