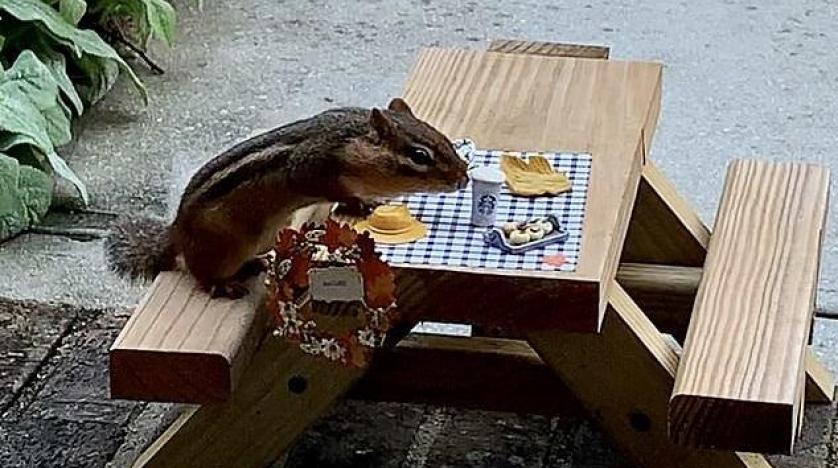 A Georgia woman has opened a wonderful restaurant for a baby squirrel who regularly visits her balcony, complete with equipment such as a table and chairs, and there is also a mini piano, according to the Daily Mail.

Angela Hansberger, 50, of Tucker, Georgia, started the project after temporarily stopping work due to the Coronavirus pandemic, and is credited with helping her deal with lockdown anxiety.

The idea came to Angela in after her Uncle Ed sent her a small wooden table that was supposed to be placed in a tree to attract squirrels.

But the writer, who has been covering the food and beverage industry for 10 years, decided to put it on the front porch instead, along with a few nuts.

Within minutes, she got a visit from her cute, furry friend, whom she called “Theonius Mank.”

When she first saw the squirrel, Angela said, he was sitting there like a little person – his hands resting on the table. I went to the store and gave him some leftover nuts. I ate it while I watched it in amazement. Then I started feeding him every day

Soon, Angela added a small umbrella and a vase made of plastic to the table, making the place a miniature restaurant.

Angela explained: “The squirrel comes between 9 in the morning and 11:30 in the morning… I feed it once a day. Sometimes he goes out in the evening and I give him a snack. ”

And she continued: “He often sits at the table in the morning before I have food ready for him.”

Angela admits that her furry boyfriend will steal glassware and other equipment, but she doesn’t mind. In fact, this makes her “laugh”.

As for the menu, Angela offers the squirrel a feast of tacos, burgers and fries, or spaghetti and salad, as well as “sushi” or pizza.

“I make almost everything from nuts, berries, grains, vegetables and herbs that come from my garden … When it all started, I looked for what the squirrel likes to eat, what is harmful to it, and what its diet consists of,” she explained.

Two adults and a child are in critical condition after shooting at a gas...