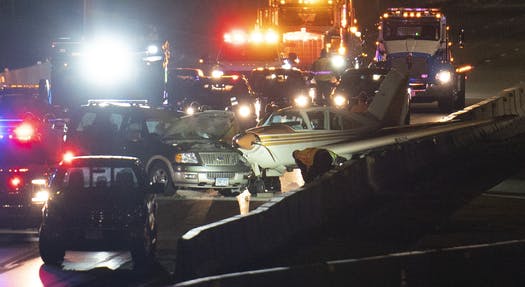 All lanes on the northern metro highway reopened Thursday morning after a small plane made an emergency landing on Wednesday night, crashing into at least one vehicle and forcing authorities to close the road for several hours.

The aircraft was towed overnight from the crash site on Interstate 35W, south of Interstate 694 near Arden Hills and New Brighton.

According to the Minnesota Department of Transportation, the plane landed in northbound lanes near County Road E2.

The Minnesota State Patrol said a single-engine Pelanka Viking made an emergency landing before 9:30 pm. When the plane landed, it collided with another vehicle on the highway but no one was injured.

The state patrol identified the pilot as 52-year-old Craig Gifford from Minneapolis.

According to MnDOT, the northbound-bound I-35W on County Road E2 was closed for the next several hours

Drier and warmer weekend ahead

Driver stabbed, killed on school bus with students aboard