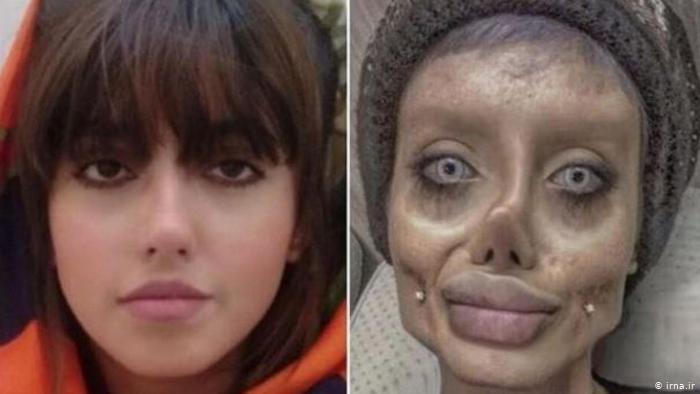 The lawyer of the famous person on the Instagram site “Iranian Angelina” stated that the young woman had contracted the Coronavirus while she was in an Iranian prison.

The lawyer of the Iranian Sahar Teper, who became famous on the Instagram site with our two Iranian sons, stated that she had contracted the Coronavirus while she was in prison in Iran on charges of blasphemy.

Payam Dravshan had published an open letter to the head of the Iranian judiciary to seek pardon for his client. Dravshan wrote in a post on Instagram that she was arrested and encouraged to draw your attention to my client’s critical situation, as she contracted the new Corona virus while she was in prison.

It is noteworthy that Sahar Tiber, who is said to be 32 years old, is followed by more than 400,000 subscribers on the Instagram site, and she became famous about 3 years ago for her strange appearance, as she performed 50 plastic surgeries to look like a zombie version of Angelina Jolie.

Sahar Tiber had admitted through clips later recorded on Instagram – the only social media platform in Iran that was not blocked – that she did not look like the American star and did not perform cosmetic surgery, but rather had manipulated makeup and Photoshop to appear in that photo in order to become famous.

On the other hand, the lawyer says that the case file was referred to a judge known for his harshness and toughness, which was placed by the US State Department at the top of the list of human rights violators in Iran due to the issuance of death sentences, imprisonment and harsh punishments against activists, journalists and human rights defenders.

The judge rejected numerous requests for the release of Sahar Tabar, according to the amnesty granted to other prisoners during the outbreak of Corona Covid-19, according to what the lawyer of the Iranian woman said.

7 people injured in Honolulu by falling branch of huge tree