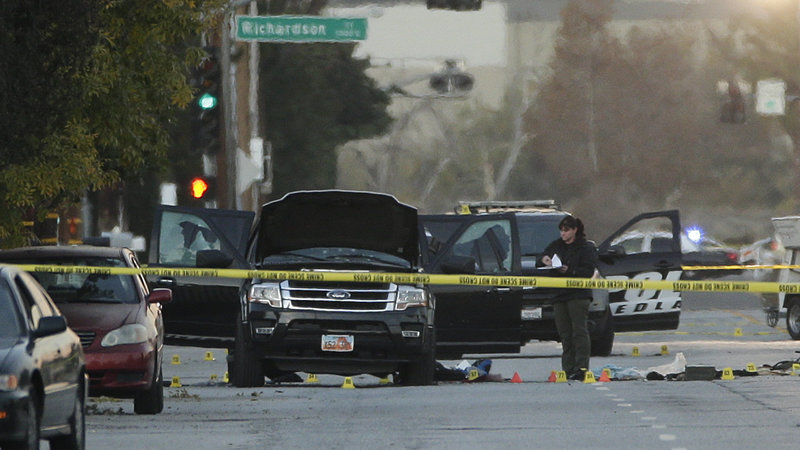 Crisis response experts from Los Angeles were at the disposal of San Bernardino County authorities today, as investigators examined whether international terrorism was a factor in a massacre committed by a married couple who later died in a gun battle with law enforcement officers.

The shooting inside a San Bernardino treatment center for people with developmental disabilities – and the subsequent gun battle – shocked the nation and left similar facilities and law enforcement across Southland on the edge of a precipice.

Federal officials from Los Angeles and elsewhere in the country worked today to uncover the motive behind the attack and determine whether there was an international terrorist element or whether it should be considered strictly workplace violence.

The Los Angeles Police Department, which was already on heightened alert due to the recent Paris terror attacks, did not act immediately after the Wednesday 11 am shooting at the Inland Regional Center, in which 14 people were killed and 21 others injured.

But Los Angeles Police have briefly placed a modified tactical alert in response to the violence. The alert enabled the division to extend officers’ shifts, according to Officer Aaron Jefferson.

Under a full tactical alert, only priority calls will be answered. The revised Tactical Alert was raised shortly after 5:30 PM. Wednesday, when it is confirmed that two suspects were killed in the shooting. The authorities identified them as Sayed Radwan Farouq, 28, and Tashfin Malik, 27, who had been married for two years and had a 6-month-old daughter.

Farooq was born in the United States to Pakistani parents and was reported to be a five-year employee of the San Bernardino County Public Health Agency, which was having a holiday party during which the shooting erupted. The Los Angeles Times reported that Farouk traveled to Saudi Arabia last year and returned with a new wife he met online.

At a press conference, David Boditch of the FBI said that Malik came to the United States with Farooq in July 2014 on a work visa and had a Pakistani passport. The couple got married after arriving in the United States.

Budic said that investigators are working to determine why the couple opened fire on the victims, and stressed that “the fact-finding process takes time.”

“We don’t yet know the motive,” Budic said. “Obviously there was a mission … we don’t know why.” Budic said it would be “irresponsible” to describe the crime as terrorism until more is known.

San Bernardino Police Chief Jarrod Bourgoin said at the press conference this morning as well, that it is not known whether the couple specifically targeted any of the victims. “They sprayed the room with bullets,” said Burguan. He indicated that Farouk was at the party earlier but left, perhaps after some kind of disagreement.

Burguan said that a preliminary investigation concluded that the suspects fired 65 to 75 rounds into the room. The couple wore black combat jackets, but they weren’t wearing body armor as previously thought.

‘You are responsible for every bullet’: Johnson County approves new gun safety measure