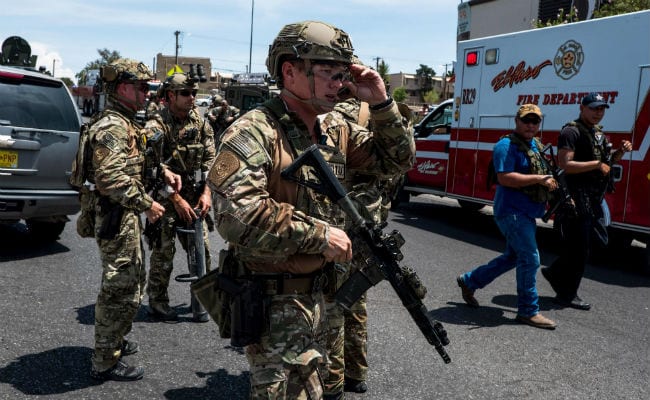 A gunman with an assault rifle opened fire on shoppers at a crowded Walmart store in El Paso, Texas, killing 20 people in the latest mass shooting in the United States.

And the governor of Texas said in a press conference that “twenty innocent people from El Paso were killed.” “As a country, we unite to support these victims and their family members … We pray that God will be with those who have been affected in any way and that He heals their wounds.”

El Paso Police Chief Greg Allen confirmed that in addition to the 20 confirmed deaths, there are 26 wounded. The Texas police chief said authorities are investigating the mass shooting as a possible hate crime. A 21-year-old white suspect from Allen, a suburb of Dallas, surrendered to police outside the store after the rampage.

“At the moment we have a statement from this person indicating to some extent that he has a link with potential hate crimes,” the police chief told a news conference.

As the people of El Paso attempt to absorb the full horror of what is being treated as a potential “hate crime”, new calls have been made to end the nationwide “epidemic” of armed violence.

It was the second fatal shooting in less than a week at a Walmart store in the US and comes after a mass shooting in California.

One suspect was arrested while authorities were studying an extremist statement that the gunman allegedly wrote.

Footage captured by phone cameras showed multiple bodies lying on the ground in the parking lot of the store as El Paso authorities made a desperate plea to donate blood.

Other footage showed terrified shoppers running out of the store, as gunfire echoed.

Police said Walmart was “at full capacity” at the time of the shooting and had between 1,000 and 3,000 operatives inside.

Various news reports stated that the ages of victims receiving treatment in hospitals ranged between 2 and 82 years.

After officials initially said that three people had been arrested, police confirmed that one person, from Allen, Texas, was the only person detained.

“We think he’s the only shooter.”

US media identified the suspect as 21-year-old Patrick Croeseus, who was white.

The “statement” allegedly written by Crusius circulating online includes paragraphs against the “Spanish invasion” of Texas and the author states that he expects to be killed during his attack.

Witnesses said that the gunman appeared to shoot randomly when he opened fire around 10:30 a.m.

A witness who said her name was Vanessa said she just broke into the Walmart parking lot when the shooting started.

“You could hear the pops of pops one by one, and in that moment as I was turning around, I saw a lady, who seemed to be leaving Walmart, heading to her car. She was carrying her purchases in her cart and just saw her she said to Fox News.”

The witness told Fox that she saw a man wearing an earmuff open fire.

“He was wearing a black shirt and camouflage pants. He was wearing something that covered his ears, like headphones, which are really thick.

He was carrying a grim reaper and he was only pointing at people and only shooting, yeah, the last thing I saw, shot someone who was in an angle.

After seeing the woman fall into the parking lot, “That’s when I thought, well, that’s not – these are not fireworks … He was shooting randomly. It wasn’t for a specific person. That was going to cross paths.”

Another shopper described how he managed to avoid being hit by hiding with his mother between two vending machines just outside the store.

“This is where the individual tried to shoot me, which he missed because I kind of backed off,” Robert Corrado told the El Paso Times.

A video footage filmed by a witness in the parking lot of Walmart in the immediate aftermath of the shooting showed three people lying motionless on the ground.

One fell next to a truck while two were on the sidewalk outside the store entrance. “An ambulance! Help!” People cried as they ran to the victims.

A man overheard him saying in the recording, “How are you, brother, how are you.”

Doctors race to save lives after NYC fire that killed 17

A potential Powell renomination for Fed faces some dissent

Teen charged with murder for crash that killed 3 valets