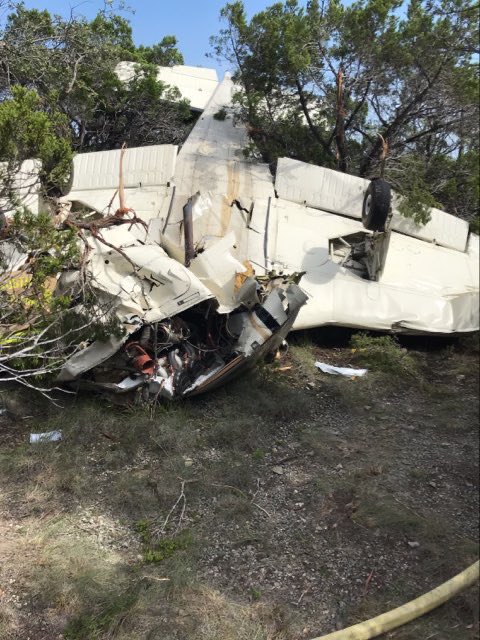 Sgt. Deon Cockrell of the Texas Department of Public Safety says officials believe the plane was bound for Rusty Allen Airport in Lago Vista, a few miles from the crash site. He says the plane came from a “southern” airport, but it was not clear where exactly.

The plane crashed into the woods, 50 to 100 yards behind Heritage Construction Co. On FM 1431, near Tyler Trail at around 2 PM.

“It was a tough rescue,” says Fire Department Chief Donnie Norman, of ESD 1 in Travis County. He explained that the officials had “difficulty” in locating the plane.

Norman, says they had to get a helicopter to find the accident. It took approximately twenty minutes to do so, as first responders roamed the rugged terrain.

The first responders then had to carry their equipment to the site, as they were unable to bring their vehicles closer. “Everything was done with the manpower.” Norman said.

Jesse Mahan and Jake Brydon of Heritage Construction followed first responders into the woods for help. Mahan said, “[First responders] just turned around and said, ‘Take this victim’ and so we kind of did like her pregnancy, she was sitting on our arms. ”

Men say the woman was barefoot and disoriented. Her head was bleeding. She said her mother was still on the plane and that she was afraid to go down the hill. So, we just picked it up and took it, ” Mahan explained.

The woman was one of two passengers who were able to free themselves from the wreck.

Mahan says the second person to walk out was a man. Both legs were injured.

A third person had to be cut off from the plane.

Two people were airlifted via the Travis County Shock Trauma Air Rescue, or “STAR” flight, to Dell Seton Medical Center in Austin. One person was taken to St. David’s Round Rock Medical Center in an ambulance.

“Our prayers are with them, that’s all we really care about all the time is their safety,” Mahan said.

Boy, 9, accidentally shot himself in the head in Austin

To shake hands or not? An age-old human gesture now in limbo

Trooper dies after after shooting on Chicago expressway