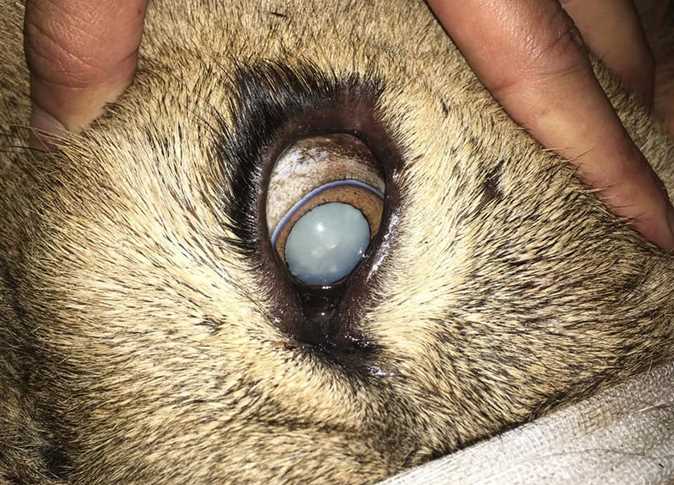 An Egyptian veterinary medical team has successfully performed a cataract operation from eye of lion in the zoo.

Dr. Khaled Ali, the chief surgeon to remove cataract from eye of the lion, said that the duration of the operation to remove cataracts from one of the lion’s eyes, which is the left eye, took about 35 minutes, explaining that the garden lion was exposed to the blind for a long time and this was reflected in his psychological state inside His private residence at the zoo.

He explained that the decision to perform the operation was based on an official request from the Zoo of the Faculty of Veterinary Medicine at Cairo University, as it welcomed cooperation with the central administration of zoos and conducting the surgery for free to save the eyes of the lion after he was blinded for a long time due to cataract, explaining that this surgery was performed. The important takes place for the first time for a lion

It is decided that the gradual improvement of vision in the left eye of the lion and the restoration of part of the vision to eat his regular food and restore the psychological balance of the sick lion, especially since the cataract disease and his blindness are reflected in his behavior, relationship and visitors in the garden as it limits his movement and is unable to reach his food Natural and makes him nervous because he does not realize what is going on around him and reflects on his health and psychological state in a negative way.

This procedure is No. 400 to remove cataracts from animal eyes, and operation number one for a lion

And that animals are the most susceptible to cataract infection with age, especially dogs whose lifespan is doubled annually, as a year in the age of dogs equals 7 years of human life, which quickly pushes the negative effects of cataract infection on animals quickly and may lead to a complete operation within two months of starting Pathological injury.