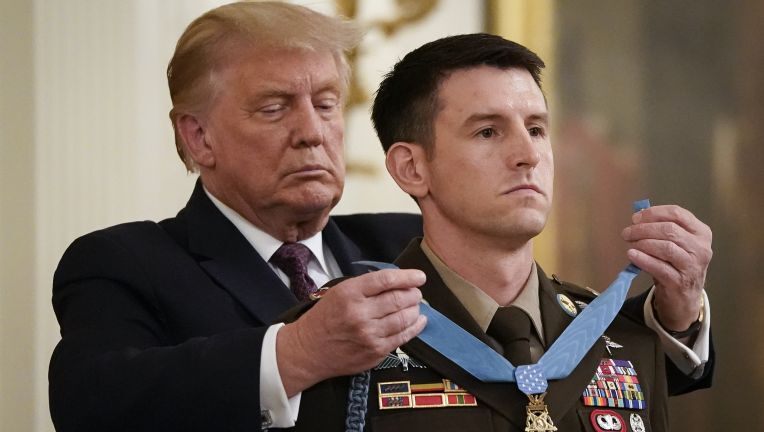 President Donald Trump awarded a US soldier the Medal of Honor for his role in a daring 2015 mission to rescue dozens of hostages who were due to be executed by Islamic State militants in Iraq.

Trump chose the 19th anniversary of the 9/11 attacks to honor the censor. Major Thomas “Patrick” Payne, who negotiated a barrage of enemy fire and repeatedly entered a burning building, in a terrifying effort saved nearly 70 hostages.

In a statement, the White House highlighted Pine’s upbringing in “a small town in America” ​​and his family’s commitment to public service. Soldier grew up in Batesburg-Leesville and Lugoff, South Carolina. His wife, Alison, is a nurse, his father is a police officer, and his two brothers serve in the Army and Air Force.

Payne was assigned to lead a clearance team for one of the two buildings known to house the hostages in a nighttime operation in Kirkuk Governorate, northern Iraq. The October 22, 2015 raid quickly became complex.

The Kurdish forces working with the US forces tried to make a hole in the outer wall of the compound, but the explosion failed. The blast alerted ISIS fighters who opened fire on Kurdish forces.

Payne, who was a first class sergeant at the time of the assignment, went up his unit over the wall to enter the prison complex. The soldiers hurried to evacuate one of the buildings. Once inside the building, the unit encountered enemy resistance. The team used bolt cutters to break the prison door locks, freeing 38 hostages

Woman dies, man wounded in shootout with police in Lincoln

With hospitalizations up, some fear St. Joseph could become Missouri’s next COVID-19 hotspot

2 killed, one seriously injured in a rural Kansas shooting