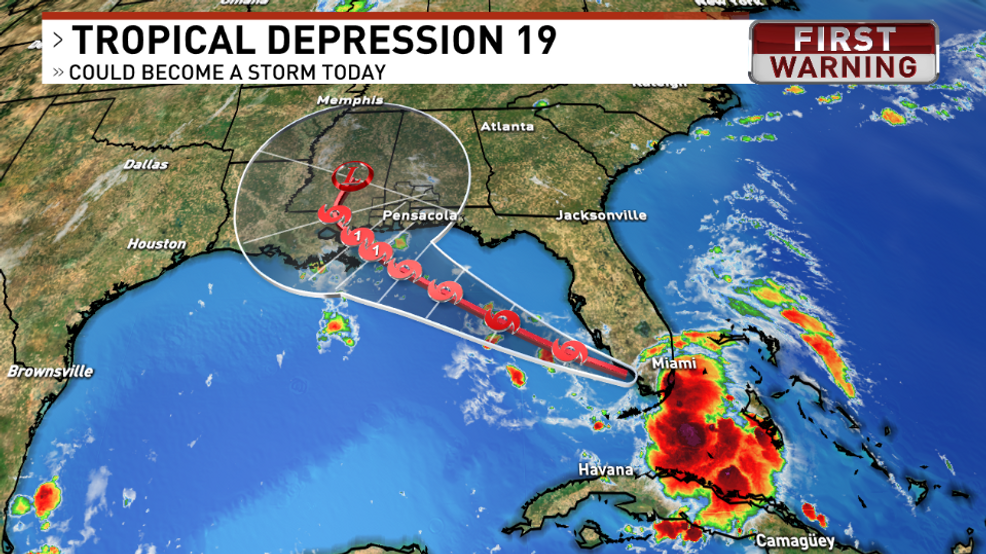 Tropical Depression 19 formed east of Miami on Friday evening. The current broad depression circulation is emerging off the Florida Peninsula Saturday morning. TD 19 will then get 48-72 hours to strengthen further over the northeastern Gulf of Mexico where it could become a Tropical Storm later on Saturday. Further strengthening towards a Category 1 is now in the forecast ahead of a Tuesday landfall west of our area. NW FL remains in the cone, changes still possible. The depression will either take on the name Sally or Teddy.

A Tropical Storm Watch has been issued just east of the Okaloosa/Walton County Line near the Gulf Coast. This extends across the Big Bend further east down towards Fort Myers, FL. Areas to the west (including Pensacola) could be put under Tropical Storm/Hurricane watches later this weekend.

Tropical/Hurricane force winds are not the main impact expected for NW Florida in regards to Tropical Depression 19 (or later Tropical Storm Sally or Teddy). The best chance for these winds & gusts are out in the Gulf of Mexico, or on the immediate coastline.

Being on east side of this storm track, the Florida Panhandle should expect heavy rainfall, flash flooding & rip currents over the next 5 days. Some areas could see over 10 inches of rain during this stretch. Red, even some double red flags, possible Sunday –

TD 19 is moving west, and as of Saturday morning, has maximum sustained winds of 35 MPH.

Per the National Hurricane Center, the current track and intensity forecast are very uncertain, and ALL Gulf Coast residents should monitor this system very carefully. Any small wobble can change impacts greatly for people along the northern Gulf Coast, including us here in Northwest Florida. Stay tuned!

Winsome Sears: ‘I am the embodiment of what we’re trying to achieve in America’

A woman dies after a house fire in Macon County

Gradual warm up this week