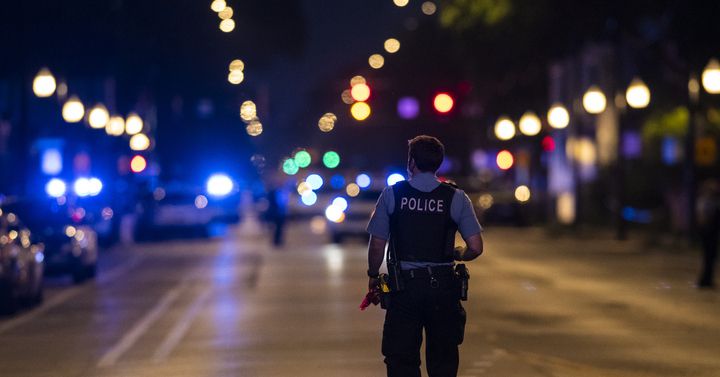 Twelve people were shot, four of them fatal, across Chicago.

The last murder occurred just before midnight in Fernwood, on the south side.

Chicago Police said a man believed to be in his 40s was found shot in the head in District 500 of West 105th Street. He was pronounced dead at the scene. Area Two Investigators are questioning a VIP.

Earlier that night, a 26-year-old man was fatally shot in West Garfield Park on the West Side.

At around 9:22 PM, officers who heeded the ShotSpotter warning at Block 100 of North Keeler Street found the man outside was unresponsive with multiple gunshots to his face and body, police said. The man was taken to Mount Sinai, where he was pronounced dead.

About an hour before that, another man was killed in Gresham on the south side.

Officers respond to the fire observer alert around 8:17 PM. At 8100 Block of South Bishop Street, the 26-year-old was found in the driver’s seat of a car with multiple gunshots, according to police. He was transferred to Crest Medical Center in Oak Lawn, where he was pronounced dead. Witnesses told investigators that a dark car went up and a person inside fired at the man’s car before he fled.

Another man was shot dead in Woodlawn on the south side.

The 39-year-old was at 6100 Building of South Evans Street at 12:20 pm. Police said that when the gunfire rang out. He was taken to the University of Chicago Medical Center where he died.

The most recent non-fatal shooting occurred Thursday night at Humboldt Park on the West Side.

One of them shot the 40-year-old at around 9:50 pm. Police said he was walking through Building 1300 on North Rockwell Street. He was taken to Struger Hospital in good condition with multiple gunshot wounds to the body.

About an hour and a half ago, a woman was shot in West Pullman, in the far south.

The 32-year-old was shot in the shoulder around 8:35 PM. Police said while walking down 11900 Block of Southern Michigan Avenue. She was transferred to Crest Medical Center in good condition. The woman told the officers that she had not seen the shooter or knew where the shots came from.

Half an hour earlier, another man was killed in Wrightwood on the south side.

Police said the 18-year-old was standing shortly after 8 p.m. at 8000 South Richmond Street when someone in a beige car fired shots. The man was injured in the leg and groin, and was taken to Crest Medical Center in a reasonable condition.

A 30-year-old man was injured in a passing car in southern Chicago.

He was standing on a sidewalk around 9:55 a.m. on 8800 block of South Burley Street when someone shot a passing car, according to police. The man was taken to the University of Chicago Medical Center in good condition with a gunshot wound to the lower leg.

Hours earlier, another man was shot in East Chatham on the south side.

Police said he was riding in a car at around 4 a.m. in 800 block of East 82nd Street when he heard gunshots and felt pain. He was beaten in the back and taken to the University of Chicago Medical Center in critical condition. The man told the officers that he could not see where the shots came from or who fired them.

Another man was wounded in a shooting hours earlier in southern Chicago.

The 35-year-old was walking into Building 8900 on South Muskegon Street when someone shot a passing white SUV, according to police. He was injured in the leg and taken to the University of Chicago Medical Center in reasonable condition.

About an hour before that, a man was shot while driving in the heart of Chicago on the Lower West Side.

Police said he was driving at around 1:20 a.m. at 2200 Block of West 21st Street, when a person in a group of men standing in the street fired bullets, hitting him in the arm. He was transferred to Struger Hospital in good condition.

The first shooting of the day injured a man in Brainerd on the south side.

The 21-year-old was sitting in a car around 12:40 a.m. in the 9100th district of South Justin Street when a person in a passing gray Nissan Rogue shot him, according to police. He was hit in the shoulder, leg and lower back, and was taken to Crest Medical Center in good condition.

On a day, 15 people were shot across the city, one of them died. The fatal shooting also injured a 12-year-old girl.

Florida newlyweds are killed in a plane crash in Colorado

Two children killed in a fire at a Pensacola motor home