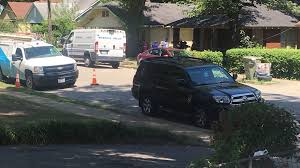 A 13-year-old boy was taken to hospital after being shot in broad daylight.

It is the most recent example of child gun violence in Memphis.

There is no word on the child’s official status.

Investigators said he was hit in the foot.

We spoke to a neighbor who said she heard the whole thing.

“They didn’t kill him,” said Elvi Bledso. “Thank God for that.”

Police said the 13-year-old was shot in the foot on Mariana Street in the Orange Mound at lunchtime.

“How many gunshots have I heard,” Bledsoo said. “Oh, it was quite a few of them. It wasn’t two or three.”

Bledsoe has only lived on the Orange Mound a few months. She was sitting on the balcony of her home when gunfire rang out. I quickly ran for cover.

She said, “When I heard the shooting, I got out of this chair and went up to that house.” “I said if they go down here, I know I should be outside of this balcony.”

She said this child might not have been shot if the schools returned to the sessions.

Refugees pushed to back of the line amid vaccine shortages

15 years old at shoot on fire in St. Louis