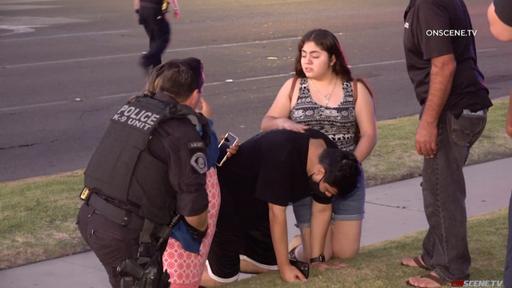 California police said a drunk driver whose jeep jumped onto a sidewalk killed a pregnant woman who was driving with her husband.

KNBC reported that the 23-year-old Anaheim woman, who was 35 weeks pregnant, died in hospital. Doctors put her baby down. The station stated that the baby was in a critical condition.

KABC reported that the white jeep “narrowly missed” the woman’s husband on Katila Street and Payless Street at around 7:30 pm.

Witness David Orozco said, according to KTLA: “The husband was, I think, checking her pulse and when he checked, he screamed.” “He heard a loud bang,” he said.

The Los Angeles Times reported that the husband was unharmed in the accident.

Police have arrested Courtney Bandolfi, 40, of Garden Grove, on suspicion of murder, drug felony and driving with a suspended license, KTLA reports.

Anaheim Police said Pandolfi has been arrested twice in the past while driving and may face murder charges.

Kyle Rittenhouse cleared of all charges in Kenosha shootings