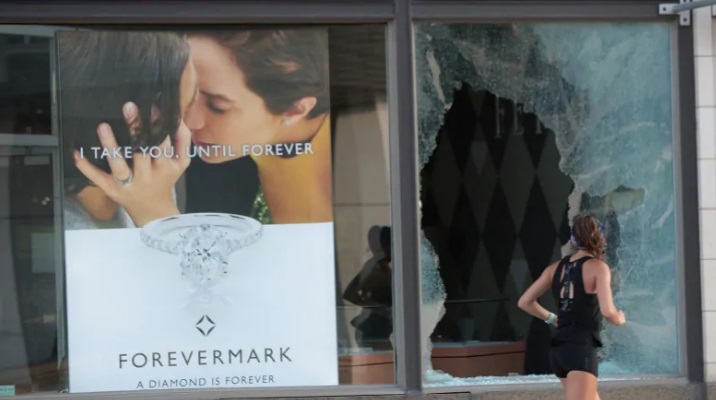 Hundreds of people smashed windows, stole from stores and clashed with police in Chicago’s Magnificent Mile and other parts of downtown.

Police spokesman Tom Ahearn said on Twitter that at one point the police were shot at and the officers returned fire. None of the officers were injured in the shooting.

It was not immediately clear what triggered the unrest, which began shortly after midnight, but anti-police graffiti was seen in the area. Hours earlier, dozens of people encountered police after officers shot and wounded a person in the Englewood district of the city.

Asked about status updates, Ahern told the Associated Press by email that the police planned to hold a press conference.

Along the Magnificent Mile, people were seen entering and exiting stores carrying shopping bags full of merchandise as well at a bank, the Chicago Tribune reported, and as the crowd increased, cars drove more people into the area.

The newspaper said that an officer was seen collapsing on a building and several people were arrested and a police car was thrown into a stone. Police acted in the early hours to disperse the crowds.

In a previous shooting incident in Inglewood, police said in a statement that they had responded at around 2:30 p.m. To a call around someone holding a gun and trying to confront someone matching their description in an alley. Police said he fled the officers on foot and shot the officers.

Police said the officers returned fire, wounding him, and a rifle was found. The statement said that he was taken to hospital for treatment, and three officers concerned were also taken to the hospital for observation.

More than an hour after the shooting, police and witnesses said a crowd confronted the police after someone reportedly told people that the police had shot and injured a child. This crowd eventually dispersed.

3 types of dog foods sold nationwide have been called high levels of mold...