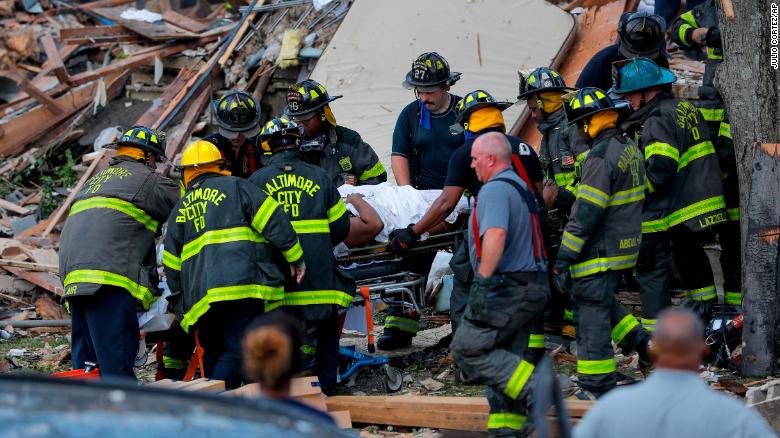 A woman died and three people were hospitalized in critical condition after a massive explosion in a residential area of ​​Baltimore, according to Blair Adams, a media officer for the Baltimore City Fire Department.

Adams said three homes were reduced to rubble in a large gas explosion.

Officials are investigating the cause and crews are searching for people who may be trapped inside. A video clip above the scene showed the first paramedics searching through the rubble.

“It’s a very labor-intensive rescue,” said Adams. “You have homes that have largely collapsed … a ton of debris on the ground, so we’re pulling in and trying to comb to see if we can find any additional occupants.”

Dean Jones, who lives several blocks away, told CNN’s WJZ he was sitting on his balcony when the blast shook his home. “It was catastrophic,” Jones said. “It was like a bomb, like you see things in other countries, where there are, like, explosions and things like that.” “It was almost like seeing it in real life. Telephone poles splitting. I mean, houses down the block, broken glass.”

“When I first got there, I could hear a voice just saying,“ Help. ”This is insane.

The Baltimore Sun reported last September that natural gas has been increasingly leaking from old pipes in recent years. At the current rate, it would take at least two decades for the Baltimore Gas and Electric Company to replace the pipes.