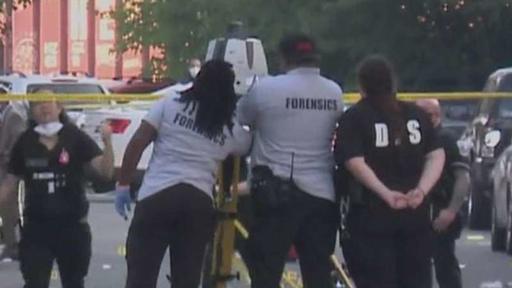 A 17-year-old was killed and 20 others were injured in an overnight shooting in Washington, DC. Among the victims was an out-of-service District 1 police officer, who Metro Police Chief Peter Newsham said was shot and “seriously injured.” Newsham said that judging from firing at multiple locations simultaneously, it appeared that there were at least three shooters.

The family has met Christopher Brown, CBS affiliate WUSA-TV in Washington, DC. His grandmother told WUSA-TV that he was a wonderful person and she would affectionately call him “Poppy.”

“You have to stop because you took something that belonged to me, someone I loved so much and someone dear to me,” Grandma Patrice Brown told WUSA-TV in a phone call hours after the shooting.

His mother, Artecka Brown, told WUSA-TV that Brown was the father of a one-year-old who had another baby on the way. “He was an innocent king … he just wanted to go to a neighborhood party,” she said.

Newsham said the shooting took place at a large social gathering attended by several hundred people. Newsham said police had been at the scene earlier.

“Initially there were police officers at the scene,” Newsham said. “I want to confirm this. I want to speak to the management team here and see if we are doing everything we can.” “Since we cannot tolerate these types of gatherings in our city during COVID-19, this is very dangerous.

No indictment in 1st case under NY’s police chokehold ban

2 in custody, 1 sought in air rifle shots at people