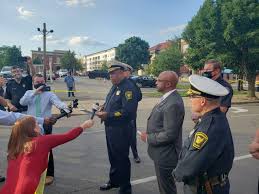 The Ohio State Highway Patrol is investigating a crash in Wayne County that killed two teenagers.

OSHP says the accident happened on State Route 57 in Green Township around 12:03 a.m.

An 18-year-old man from Illyria was driving south for 57 Saudi riyals when he failed to obey at a red light.

Officials say he hit a car, which was being driven by an 18-year-old woman from Apple Creek, from the driver’s side. She was trying to turn left from County Road 7 and continue north on SR 57 when the accident occurred.

After crashing into her vehicle, the man’s car continued south on the road before hitting a fender and halting.

A Wayne County investigator announced the two drivers’ deaths at the scene.

Authorities say alcohol appears to have been involved and none of the teens were wearing seatbelts.

This incident is still under investigation.

Hurricane Ida makes landfall in Louisiana as one of the most powerful hurricanes to...

A man killed in a Memphis shooting attack