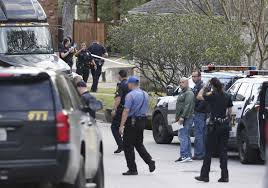 Cleveland Police are investigating an accident that claimed the life of a woman this weekend.

Police said the woman, who was found with a bullet in the back, was taken to Metro Health Medical Center, where she died of her wounds.

Police stated that an altercation took place before the shooting. According to eyewitnesses, a car was speeding and nearly collided with a child who was outside. The victim and one of the passengers were alleged to have exchanged words before the passenger got out of the car and fired a pistol.

The suspect or suspects are unknown at this time.