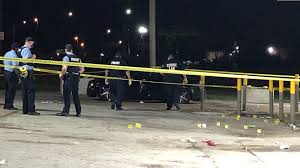 Police in St. Louis are investigating the shooting death of a man at a gas station in the northern part of town near Interstate 70.

Police said the shooting took place at around 1 a.m. at the BBV East Grand Avenue station, in which a man was injured several times. The police did not reveal the identity of the victim and there were no reports of arrests.

The shooting occurred in the city’s near North Riverfront neighborhood, which has seen at least three murders this year. The St. Louis Post-Dispatch newspaper reported that the city recorded 158 murders this year.

The fatal shooting occurred hours after federal officials announced that 50 Homeland Security employees would be sent to St. Louis as part of Operation Legend, a federal crime-fighting program, to assist city police in high-crime areas.