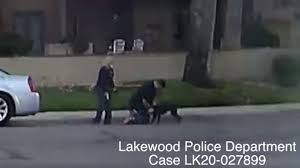 Authorities said a 37-year-old man who had been filing charges for domestic violence and other crimes was arrested after he shot officers who were chasing them before and during a chase on local streets and three Phoenix Metro highways.

Brian Lamb fired one shot towards the officers who attempted to locate and arrest him at a shopping center near Interstate 17 and then again after the ensuing chase the officers first took to I-17, then Interstate 10 and Loop 202 Express, Peoria, a police department statement said. .

Parts of the highway were closed while the police found a gun thrown from the vehicle driven by Lamb during the chase, the statement said.

Lamb was imprisoned after being taken to hospital for treatment for dog bite injuries as a result of his arrest when the chase ended. The statement said that no one was hurt.

Sheep was searched on charges alleging domestic violence, stalking, harassment, and protection violation orders. The statement said he was imprisoned on suspicion of new charges, including aggravated assault on a police officer, unlawful absconding and endangerment.

Online court records did not specify a defense attorney for Lamb who could comment on his behalf.

4 In custody after shooting a Philadelphia Airbnb led to a police chase, and...

Sampson scheduled to start for Chicago against St. Louis

A court acquitted 4 African Americans after their death, 70 years since a “rape...