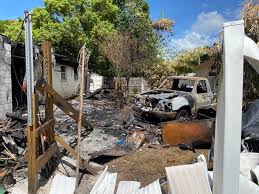 Police in St. Petersburg said a 67-year-old man in Florida set fire to a house that killed him and his 75-year-old wife.

The Tampa Bay Times reported that Charles Nelson used an accelerator to set the house on fire.

Nelson’s wife, Janet Nelson, said she called 911 to report the fire, but she was not able to leave the house.

Saint Pete crews pulled the fire and rescue the couple out of the house. Charles Nelson died at the scene, while Janet Nelson died in a hospital where she is being treated, police said.

The newspaper reported that the police were called home two more times for local discussions – in 2014 and last year. No arrests were made after these visits.

Pat Dettu, 76, lives next to the house. The police evacuated her from her house, and she was not damaged by the fire. The fire destroyed a large part of the fence separating the two houses.

She said, “I heard a big boom and I thought people were still firing fireworks.”

She said that Nelson’s dog also died in the fire.

Two killed when plane crashes into house known to homeowners

What to do if you lose your COVID-19 vaccine card