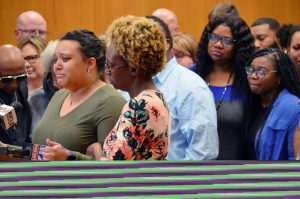 The family of a black man who was shot dead while fleeing the police in Mississippi filed an unlawful lawsuit against the administration, the city, and the official who was cleared of the shooting.

The Biloxi Sun Herald newspaper reported that the federal lawsuit relating to the death of Tusan Dimon Sims, 27, was filed at the US District Court in Gulfport on behalf of Sims’ mother and two children. She claims that Sims died as a result of “excessive, unnecessary and illegal” force by the police

Authorities at the time said that the police attempted to arrest Sims in August 2019 on multiple felony charges, including frequent police desertions in other pursuits, aggravated assault, domestic violence, and endangering children.

Brandon Ashley, chief of Moss Point police, said Sims led the police on a hunt from Pascagoula to Moss Point before he abandoned the car and ran. While chasing the foot, Sims was charged with displaying a firearm “in a threatening way,” according to the president.

Ashley said that the deadly force of Officer Lansen Shipman is justified because Sims refused to follow orders to stop or drop the weapon.

In October, a major jury in Jackson County acquitted Shipman of criminal wrongdoing in the shooting, although he still faced internal discipline for failing to play the sound of his body camera during the interview.

The family’s lawsuit alleged that the ship Shipman did not receive adequate training in the techniques of using force and shot and killed Sims unnecessarily. He also claimed that he had failed to follow the protocol by not asking for backups before Sims was chased and fired while Sims was still at a distance, among other issues.

The lawsuit also said that the police failed to give Sims immediate medical assistance.

3 children die as a result of hurricanes in southern U.S

4 injured when large fire breaks out at Texas refinery