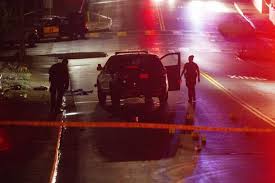 The San Francisco Bay City police chief on probation after several fatal police shootouts said he opened an investigation into allegations that officers were insisting on their badges on the occasion of the in-service killings.

Vallejo Police Chief Shawnie Williams told the San Francisco Chronicle that he would not tolerate such a “vile” act if the allegations were true.

“It could be considered a sabotage of the divisional property,” said Williams. “And if you’re doing it in celebration of killing or shooting, that’s totally annoying.

John Whitney, a former Vallejo police chief, accused the administration of expelling him because of blatant misconduct, which included fears that some officers were bent their badges in ritual killings.

Whitney’s allegations about his first release were reported by the news website Open Vallejo.

Williams, who was appointed president in November, said he had never noticed an insignia bent on his strength, and he did not speak of allegations to any of the accused officers.

“It’s kind of supporting what everyone else was saying or hearing,” said Mark McCoy, older brother Willie McCoy, a 21-year-old man who was shot dead by officers in Vallejo in 2019 after he fell asleep with a gun. On his lap with his car in Taco Bell’s car.

Alison Perry Wilkinson, a lawyer representing Whitney, told the newspaper that her client reported misconduct to Mayor Bob Sampian and other city officials before he was fired after 19 years at work. Whitney said he became aware of this practice after McCoy was killed.

Sampayan, who joined the city’s police force in 1985 and retired as a sergeant after 27 years with the administration, said that he was “appalled” by the allegations. He said he could remember one incident during his career when the officer had a curved corner on his badge, but Sampayan did not think of any of that until Whitney came to him with allegations after his expulsion from management.

“My first idea was to say I’m sorry (for the community) and that we need to change that culture. Symbian, who was elected in 2016, said I am dismayed by this behavior.

He and the city council have called for a special prosecutor to deal with the investigation into Sean Monterosa’s death. A 22-year-old San Francisco man was killed when a police officer in Vallejo opened in response to a looting report with a high-powered rifle, and fired five shells through the windshield of an unmarked police car.

Police later said that Monterosa had a hammer but no pistol. The police launched a separate investigation after destroying the windshield – a key piece of evidence -.

Officials said that an unidentified police officer was placed on administrative leave while the city maintains an external investigator to conduct an administrative investigation into the destruction of evidence.