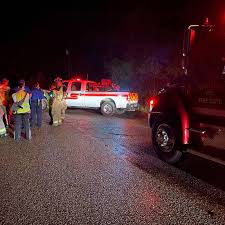 The US Coast Guard confirmed that two people were killed in a plane crash in Baldwin County.

The small plane crashed near Robertsdale.

The mayor’s office tweeted, saying that firefighting units were able to make their way to the crash site in the heavily wooded area by using four-wheel-drive vehicles.

They add Baldwin County Coroner office and the National Transportation Safety Board will conduct an investigation.

No further details were provided.

A plane coming from Gulf Shores crashed, according to Baldwin County Sheriff’s Office.

The plane’s tail number is said to be N3156W. According to Flight Aware flight tracking, the plane left Jack Edwards Airport at around 6:45 pm, and it was last reported around 7:01 pm.

The aircraft is listed as a five-seat Beechcraft Bonanza owned by QT Flyers LLC headquartered in Florence, Alabama.

According to the Coast Guard, air traffic control heard a distress call. At 7:30 p.m., a US Coast Guard helicopter was dispatched to the area to verify this when the plane caught fire near Stapleton.

First responders continue to work to approach the crash site, but they say the plane is in a thick forest area miles away.

Officials add that the injuries are unknown at this time.

A girl, 16, was shot on the western side