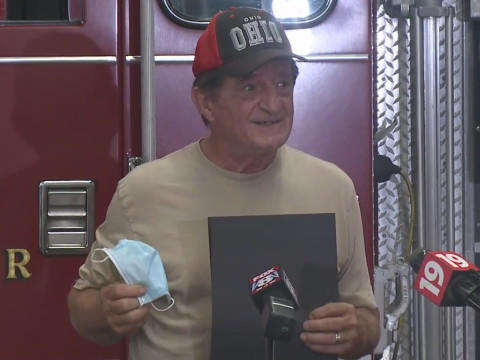 “I called 911 and ran towards the building.”

Norman Yuder is a neighbor that most people hope to have.

The 68-year-old father was driving his car to work in Canton when he saw a burning house .

Six people were sleeping at home at 915 Smith Ave. SW when the fire broke out on the first floor.

Norman saw smoke on his way to do renovations in another building.

Norman helped four people get off the second floor of the building.

There were two people in the basement.

All six got out of the house. One was treated in the hospital, as were two firefighters.

“I am so grateful to God that he pushed me to get there at the right time,” said Norman.

Two dogs were killed in the fire, but one cat was rescued.

The fire is still under investigation.

Norman was recognized at a ceremony and given the Good Samaritan in the Canton of Fire Station 1.

“The other day in the news they referred to me as a hero, and I really did not look at her that way. He said,” I look here, “pointing to the firefighters.” These are the heroes who protect us every day. “Firefighters, the men in blue uniforms keep the canton good and safe.