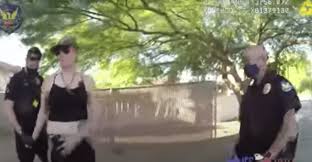 Phoenix police released footage of the body camera last week from an exchange of fire with a woman who took out a pistol and shot the officers while handcuffed earlier this month.

Phoenix police said that officers responded to a motel on the Black Canyon Highway after a man called, saying his roommate “got crazy” and shot a pistol.

When she approached, the woman, known as Jovana Kelsey McCreary, 24, told the officers that she did not have a pistol, but when an officer searched her bag with her permission he found bullets and illegal drugs.

She also denied that she had fired a bullet during the alleged fight with the room.

In the video, while an officer was trying to tie McCrery with handcuffs, she managed to get out of his fist and pulled a handgun from her waist, and shot while she was running in the street.

“She has a pistol!” One of the officers can be heard saying, they are firing back

McCreary was wounded twice and taken to a hospital in critical condition. She survived her injuries.

No officer was hurt in the shooting.