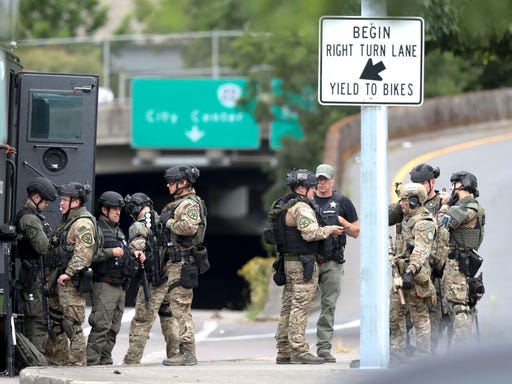 Authorities said an Oregon man was detained hours after he parked near a police car and fired several shots inside, wounding one of the officers.

Salem Police Department said that the investigators were in a car at about 3:20 am after an investigation, when another car pulled up to the side of the car. Several shots were fired at the police car and a detective was wounded in the arm.

The car of the suspect, who was identified as Alejandro Massiel-Salcedo, 27, escaped from the scene.

Injured officer, identified by management as Det. Emmons, a 21-year-old veteran of the force, led himself to the emergency room and was treated for a non-life-threatening wound and was later released.

“I am no more comfortable,” Jerry Moore, Salem Police Chief, said in a statement.

Together with SWAT members and negotiators, the officers surrounded Maciel-Salcedo’s house in Salem. The ministry said he eventually surrendered safely.

He was held in Marion County Prison on suspicion of numerous charges including attempted second-degree murder, attempted first-degree assault, felony in possession of a weapon, assault and multiple charges of unlawful use of the weapon.

19-year-old accused of killing 1, wounding another with 5-year-old in car in DeSoto tracked...

2 dead, 8 others injured after shootings — 1 officer-involved