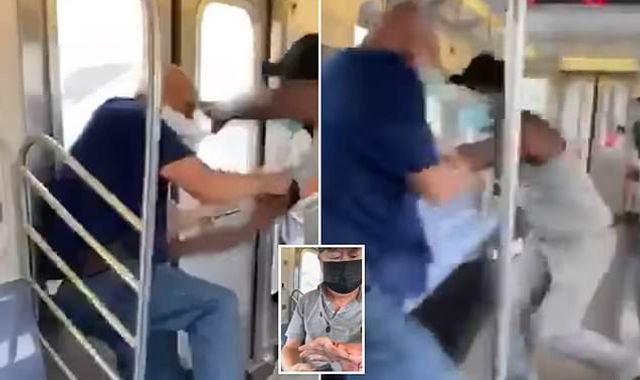 Patrick Chambers, 46, was arrested by the New York Police Department (NYPD) on charges of assault, threat and criminal possession of a weapon following a stabbing accident on the seventh train earlier this month.

In the video, the suspect was wearing a coronavirus mask and did not show his face.

However, the suspect can be seen attacking a passenger who appeared to be stepping in to help after a first victim was killed with a knife Chambers.

A spokeswoman for the Office of the Deputy Commissioner for Public Information, investigator Sofia Mason, said that the attack occurred on July 5 on 52nd Street in Queens and had not provoked him.

The suspect produced a knife and stabbed a 71-year-old male and a 73-year-old man. The two victims were taken to Elmhurst Hospital and were in stable condition at the time.

Police said the suspect was arrested at 52st Street and his knife was pulled from his person.