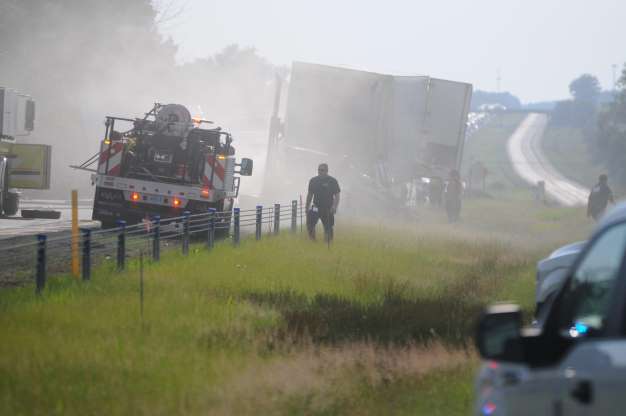 Four children were killed when a car in which they were traveling on Interstate 70 collided with a semi-trailer and caught fire.

The dead were Anisa Acosta, 15; Quentin Michael McGowan, 13; Brekkin Riley Bruce, 8; Trentin Boo Bruce, 6, according to Indiana State Police in a press release. They were all siblings.

A passer-by pulled a Chevrolet Malibu 2020 driver, Aaron Bruce, 34, from Kansas City, Missouri, from his car, according to the statement. A medical helicopter transported the severely injured driver to the Askinazi Hospital in Indianapolis. Sheriff Randy Ritter said he was still in critical condition with the burning unit.

The statement said that none of the Chevrolet passengers – the four children – were able to escape from the car. Firefighters from Cambridge City, Green Fork, and Hagerstown responded to the fire.

“It was a difficult scene. It was very difficult,” said the sergeant. John Bowling of the Indiana State Police said. “It can be emotional attrition for the first responders when you are in a scene like trying that scene. Any loss of life is tragic, but it is especially difficult when the children are.”

Police said Knorth’s truck driver failed to slow down in the construction area and crashed into a Chevrolet passenger car.

The police said the truck pushed the car into the back of another semi-trailer, then pushed the car from the left lane to the dirt roadblock where the cars caught fire.

The statement said that the 2004 Kenworth truck driver, Cory Wirow, 31, from Camden, Ohio, escaped from his burning truck and was transported to Red Health with life-threatening injuries. An investigation by Wayne County Sheriff’s Office indicates that the drugs were a contributing factor to the accident, and Withrow was detained around 1:20 am in Wayne County Prison after his treatment in Reed.

He was initially charged with four counts of reckless criminal offense, four counts of a drunken felony causing death and one felony charge while working drunk causing serious bodily injuries, according to a Retter press release.

The accident occurred while Withrow was heading east to tow a box trailer loaded into the right lane. According to Bowling, Withrow came on the traffic which was slow but moving as it merged to the left as the construction area west of Indiana 1 junction passed traffic to one lane. Withrow failed to slow his Kenworth and hit the back of a slow Chevrolet.

Withrow’s launch was driving infrequently and at high speed before the accident, according to a police department statement. Initial toxicity reports indicated that Withrow had several drugs in his system.

A police statement said Kenworth pushed Chevrolet into the left rear corner of other semi-tandem tandem trailers that also slowed down the merger. The second tandem trailer was torn off its axis as Kenworth continued pushing Chevrolet through the left lane to the center, as both cars caught fire.

The second truck driver, Thomas Flaherty, 57, from Springfield, Ohio, was not injured.