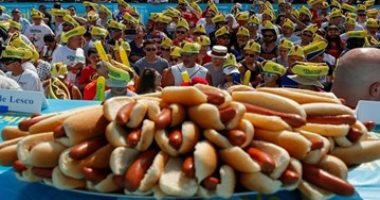 The outbreak of the Coronavirus did not prevent plans to establish the annual “Nathan Vmas” challenge to eat sausages in Coney Island, New York, on the occasion of Independence Day, nor did it prevent its current male and female heroes from setting new records.

Men’s category winner Joy Chestnut said moving Nathan’s challenge to a weather-controlled indoor location to prevent the spread of the Corona virus had given him the driving force he needed to win. Hundreds of spectators usually flock to the event.

“This is a crazy year and I’m happy to set a record,” Chestent, who weighs 100 kg, told ESPN after the 10-minute contest.

His previous record was 74. Chestnut surpassed his four competitors by a large margin.

In the women’s category, champion Micky Sudo of Torrientington, Connecticut, topped the 60-kilogram race, beating four other contestants by eating 48.5 sausages. Sudo broke her previous record of 41 pieces and the women’s record of 45.

The Coney Island competition has been taking place since Nathan Handwerker opened his world-famous beachfront restaurant in 1916.

Flood watches in US West as mudslides close major interstate