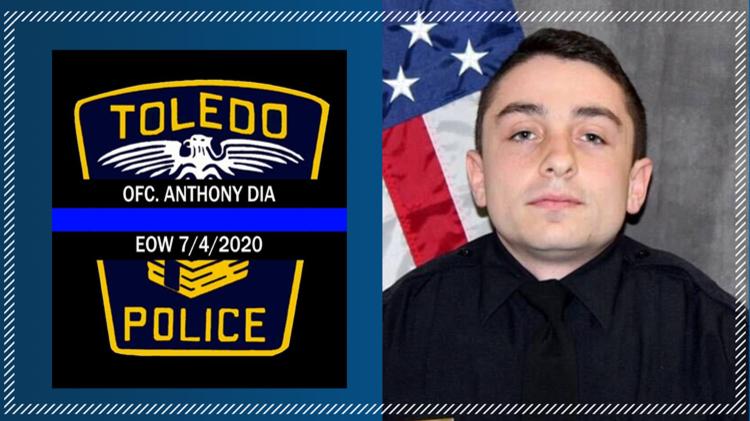 Police said an officer who was responding to a disturbance call in a Toledo parking lot was shot dead by a drunken man carrying beer.

Police chief George Krall told a news conference that Toledo Dia, 26, was shot in the chest shortly after midnight in the Home Depot car park in 1035 W. Alexis Road, and then announced his death in hospital.

According to officials, Officer Zia was the first officer on the site to try to contact the subject, which he believed was drunk.

The suspect, who was only described as a 57-year-old white man, produced a pistol and opened fire, and officer Zia struck the chest. Despite his wounds, Officer Zia managed to return fire as the man fled.

Additional officers arrived at the scene of the shooting and set up an ocean to search for the suspect.

Eyewitnesses stated that they had noticed the suspect’s flight to a forested area. The drone and K-9 unit provided research assistance.

Krall said that at some point the officers heard one shot coming from the woods. The gunman was found killed by a slight bullet to the head at about 3:15 am.

Officer Zia joined the Toledo Police Department on July 27, 2018. He is the 31st Toledo Police Officer killed in the line of duty.

He leaves behind a two-year-old wife and child. The GoFundMe account was created to support the Dia family. Those interested in contributing can do so here.

The mayor, Wade Kapsukevich, said that he was in Toledo Hospital, where Zia was transferred after the shooting.

The Mayor said: “I will never forget the sight of Officer Zia exiting from the hospital on my groan, wrapped in his body with an American flag, surrounded by about 30 Toledo police officers saluting and crying.”

Neither Karal nor Kapszukiewicz answered questions during the press conference. More information is expected at another news conference on Monday.

Governor Mike D. Wayne ordered the transfer of flags at Ohio State Headquarters and in Lucas County, with half the staff starting Sunday. He ordered them to stay there during the funeral service on Tuesday.

DeWine also issued a condolence statement to the family of Officer Zia and his colleagues in the Toledo Police Department. You read:

Farran and I were deeply saddened to learn that Toledo police officer Anthony Dia had died last night while carrying out his duty. We express sympathy for his wife, two-year-old child, other family members and colleagues in the Toledo Police Department. To honor the life and service of Officer Zia, I ordered that flags in Lucas County and State House be reduced to half the staff starting tomorrow and through his funeral service.

Police departments throughout the state also offered their condolences to the Zia family and the Toledo Police Department.