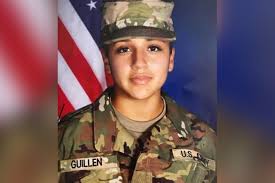 An American female soldier, Cecilie Aguilar, was accused of complicity in the killing and dismembering of her colleague’s body, which had disappeared about 3 months ago.

The 22-year-old recruit, Cecily Aguilar, is charged with conspiring to conceal evidence of the murder of her 20-year-old colleague, Vanessa Guilin.

Guilin was last seen at her workplace in Fort Hood, Texas, on April 22, before her disappearance.

Earlier this week, authorities in Bell County found remains believed to be returning to the female soldier.

Officials at the Fort Hood military base revealed that the main suspect in the disappearance of female soldier Guilin, a 20-year-old soldier named Aaron David Robinson, had committed suicide by shooting himself while trying to arrest him.

The missing female soldier’s family had previously called for the Fort Hood military base to be closed if the young woman was found dead, and accused the army of being involved in hiding her daughter.

“We realize that she was subjected to sexual harassment by her superiors at least twice because she spoke with her family, friends, and co-workers about this,” said Natalie Hawam, the lawyer for the American female soldier’s family, in a television statement.

On the other hand, officials at the US military base announced that they had no reports of the female soldier being subjected to harassment or sexual assault.

A criminal complaint against female soldier Aguilar says that Robinson, the main suspect in the case, told her that he had killed a female soldier at Fort Hood camp, and admitted that he had beaten her with a hammer in a warehouse at the military base to death, and then transported her body to a remote location.

It is noteworthy that the American Fort Hood military base is located near the city of Killeen in Texas.

This is the second case in this rule after a similar disappearance of a soldier named Gregory Fidel Morales in August 2019, whose body was not found until last month.

The United States breaks the 10,000 deaths due to corona

How To Make Homemade Carp Baits Defeat Any Readymade Boilies In Winter Or Summer!