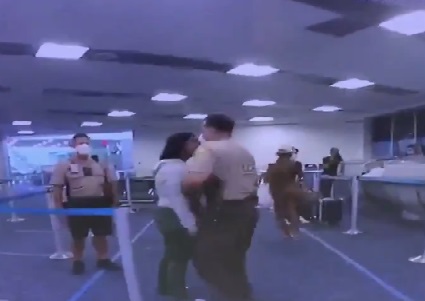 A new video spread on social media, showing an American police officer at Miami Airport, punching a woman with dark skin in her face, before he grabbed her and pushed her to the ground.

In the video, the woman appeared arguing an officer at Miami International Airport, where I heard her saying: “What are you going to do?” As she approaches him, he immediately punches her in the face before being pushed to the ground and arrested.

The officer says that the woman “hit him with the head” after a second officer intervened.

“I was shocked and angered by the video. I immediately started the investigation and ordered the officers involved to be excused from service,” said Alfredo Ramirez, director of the Miami Police Department.

And he considered that such measures undermine the hard work of the police, stressing that “any officer who acts with this absurdity will be held accountable.

This, in turn, said Carlos Jimenez, mayor of Miami, Florida. It is an excessive and unnecessary use of force that is not what the MiamiDadePD Miami Police are trained to do.

The United States is witnessing angry protests against the “racism” and “violent behavior” of the police towards the “blacks”, against the background of the killing of the young George Floyd at the hands of a policeman earlier in the state of Minnesota.