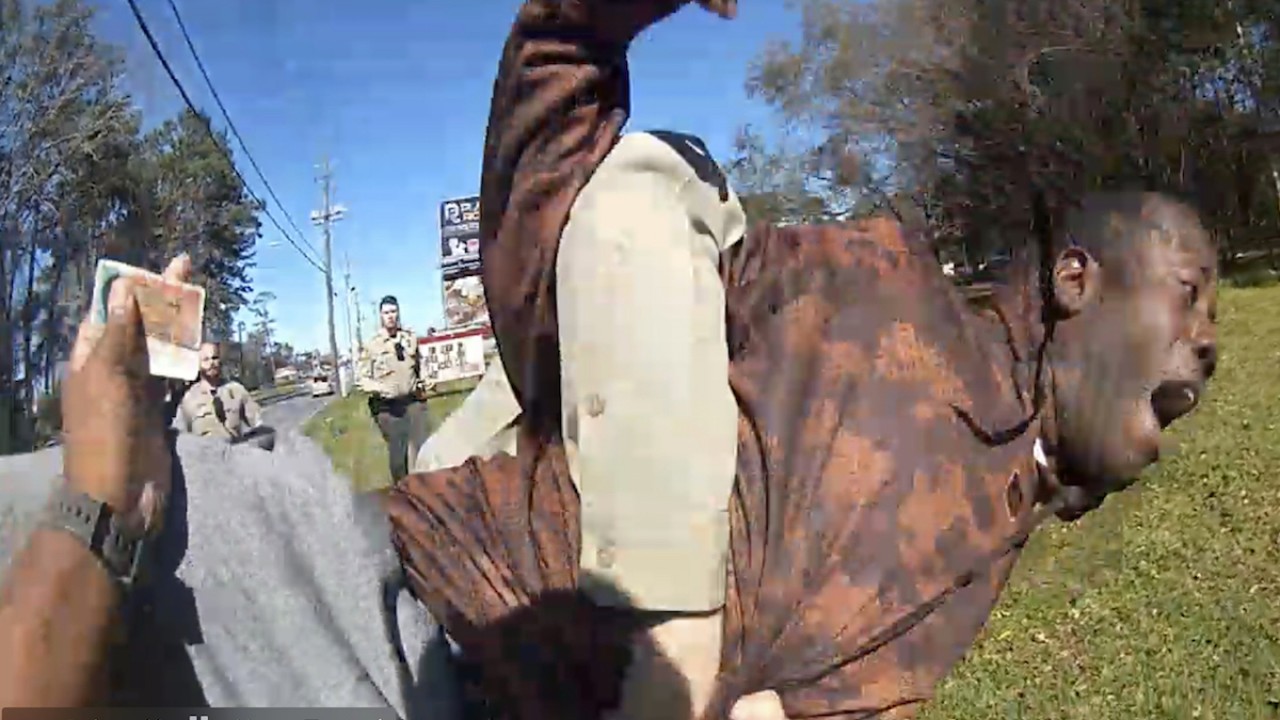 Body camera video shows Antonio Arnillo Smith giving his driver’s license to a black police officer and answering questions cooperatively before a white officer climbs up behind him, wraps him in a bear hug and hits him on the floor.

“My God, I broke my wrist!” The 46-year-old black man shouted as two other Valdosta officers arrived, holding him and tied his hands after removal. One of them finally tells Smith that he was arrested under a pending memo, and is immediately corrected by the first officer: he got the wrong guy.

Smith was holding his wrist and slept, and was left without charges after the violent confrontation on February 8 in Valdosta, Georgia, near the Florida state line.

He is now suing all four officers, as well as Valdosta police chief, mayor and others, saying that the police used excessive force and violated his civil rights.

“When you see this video, you can’t help but say this is a farce,” said Nathaniel Haugabruck, one of Smith’s lawyers. “Nobody should do it this way.”

The federal lawsuit comes during a national protest against police brutality against people of color, sparked by the murder of George Floyd in Minneapolis. Hogabrock said that police had stopped Smith for interrogation after a drug store employee told him he had been overseas.

“She clearly has some ethnic tones,” Haugabruck said on Thursday.

Smith’s meeting with the police largely passed unnoticed for more than four months, until he filed the case on June 19. Valdosta issued a statement three days later, saying that the police were conducting an internal investigation and that Smith had never lodged a complaint.

City officials also released one of the four body camera recordings – the one who caught Smith, who does not show removal because the camera is pinched to Smith’s back. Valdosta officials only posted body camera videos with a clearer view after the Valdosta Daily Times published a clip received from Smith’s lawyer.

The city statement said that the police responded to a report that a man who was harassing clients and asking for money outside the drug store at the same time found two suspects near the description. The officers who interrogated one of them learned that he had a pending arrest warrant. The other was Smith.

The city statement says that an officer, identified in the suit as the sergeant. Billy Wheeler approached Smith mistakenly that he was the wanted man, and “advised him to put his hands behind his back.” The city said that Smith “began to resist by pulling his arms forward and tightening his body,” which caused Wheeler to take him to the ground.

This is not an accurate description of what the officers ’cameras recorded.

The video shows Wheeler walking silently behind Smith, holding his right wrist and hanging his arms on his sides in a bear hug. Only then does he instruct Smith to put his hands fixed behind his back, and Wheeler hits him almost on the ground afterwards.

In response to a question about this contradiction, city spokesperson Ashlyn Johnson said that the city has no further comment. She did not know the status of the officers involved.

“The city of Valdosta and the Valdosta Police Department take any report of any injury to the citizen seriously,” the statement said.

Videos recorded at noon on a clear sunny day show the encounter from start to finish. Smith screams of pain because of the broken wrist, and Wheeler says: “Yes, it might be broken.” The officers removed the handcuffs in about a minute, and called an ambulance. He is still on the ground asking Smith about the reason for his arrest.

One of the officers told Smith: “We have a warrant to arrest you.”

This pushes the officer who stopped Smith for the first time, who was identified in court records as Dominic Henry, to correct it.

“Hi, this was someone else,” says Henry. “The man who has an arrest warrant is there. No, there are two different people.”

Smith leaves the scene before the paramedics arrive. His lawyer said that Smith wanted to get away from the officers as quickly as possible, and the wrist did not recover properly.

Smith’s suit in the US District Court seeks unlimited monetary compensation. In a letter sent to Valdosta officials requesting a settlement before the lawsuit was filed, Smith’s attorneys requested $ 700,000. His lawyer said he wanted something else as well: Valdosta Police Department’s commitment to reform.