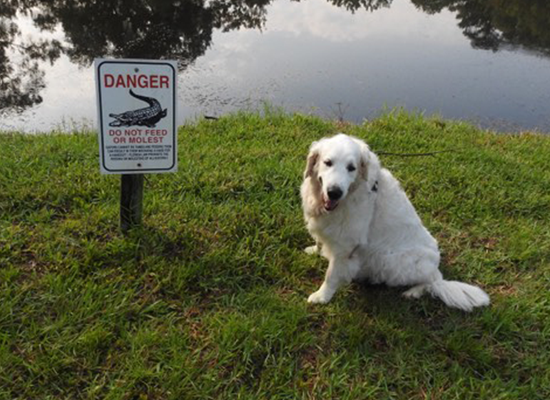 A man from Florida entered a fight resembling a “tug of war” with a crocodile that grabbed his dog and pulled him to the river this week, according to a Fox News report.

Trent Tudel was walking with his 6-year-old dog Loki on his farm in Pasco County, on Monday morning when the dog attacked a crocodile approximately 13 feet tall about 4 meters away and Tudel, a former army sergeant, jumped in an attempt to save the dog.

He said I grabbed the dog’s collar to try to pull it, and I ended up in a tug of war with this crocodile who refused to give it up

So I got into the water and started hitting on the head of the crocodile until he finally left the dog, he added

While Todel suffered minor scratches from the fight, Loki’s front leg was almost cut, and he needed emergency surgery.

“When I pulled my lock back, I saw the bones outside. The doctors put him metal sheets and nails, and they were able to restore the bones,” Tudel explained. We hope he can restore all his claws after that

Now, Todell is so determined to catch the crocodile that he traps him with the help of the Florida Fish and Wildlife service.

Missouri prepares to draw first round of $10,000 winners from pool of vaccinated residents