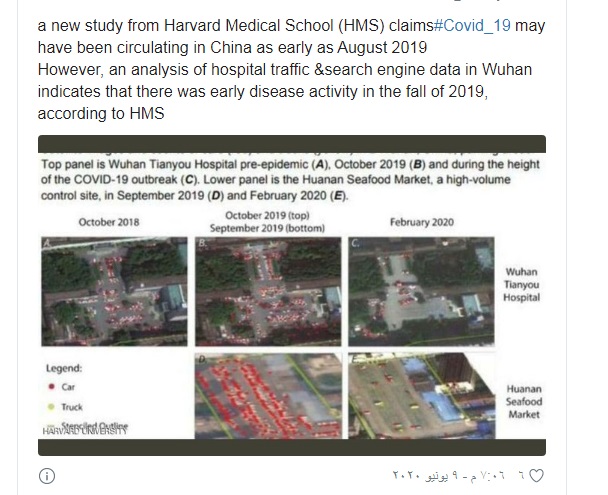 The Harvard Medical School of Harvard University, a major American university, published a study confirming that the Corona virus may have spread to China since last August.

The authors of the study said that the analysis of satellite imagery of activities and movements near hospitals in Wuhan and data from the Chinese Internet search engine “Baidu” indicate an unusual activity related to the outbreak since last autumn.

The researchers followed pictures taken from the satellites of the parking lots near 6 hospitals in Wuhan, and they calculated the number of cars to estimate the extent of the overcrowded hospitals.

The numbers of cars were similar to those detected during influenza waves earlier.

The data indicated that there has been a jump in overcrowding in hospitals since August, reaching its peak in December.

The fullness rate of five out of the six hospitals in the city was unusually high in September and October.

The researchers also monitored a rise in the search for the words “cough” and “diarrhea” on the search engine “Baidu”, knowing that they are symptoms of infection with the Corona virus.

This rise was monitored about 3 weeks before the outbreak was confirmed in early January.

However, the researchers pointed out that “they cannot confirm whether the rise in data (regarding overcrowding in hospitals and online research) is directly related to the new virus,” but their evidence “supports the findings of other research, which shows that an emergency arose before the virus was detected.” In the fish market “Bohan.

The study also suggested that the virus could spread internationally before it was detected by the Chinese authorities.

For its part, the Chinese Foreign Ministry rejected the study’s conclusions, and a ministry spokeswoman Hua Chunying said during a press conference that “deriving conclusions from phenomena such as car traffic … is very ridiculous.”

It is reported that China informed the World Health Organization of the outbreak of the Corona epidemic in Wuhan in late December.

China has rejected all accusations that it hid information about the Corona virus, which it faced mainly from the United States, stressing that it dealt with the epidemic crisis transparently from the start.

My mom in Chicago and her 2-year-old son started their Southwest trip because he...