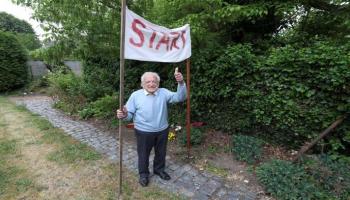 A 103-year-old Belgian doctor walks around his garden every day to collect donations for new Corona virus research, inspired by the idea of ​​a 100-year-old man who became a hero in Britain after walking a long distance around his garden with a walk.

The Belgian, Alphonse Limpolls, a retired general practitioner, began his 32.2 km long journey in the municipality of Rotselare, northeast of Brussels, on June 1 and plans to complete it on June 30.

Each day, Limpoles cuts into ten phases totaling 145 meters, three of which are in the morning, the same at noon and four in the evening. In order not to forget the stages he cuts, he throws a stick in a bowl for each stage.

The idea, he said, came when Tom Moore saw the 100-year-old Warrior who participated in World War II and set an example in Britain when he raised the equivalent of more than $ 40 million to his country’s health service by walking around his garden.

“My children told me I could walk like Tom Moore at least. Moreover, I am 103 years old. My granddaughter had just taken part in a marathon and as a joke I said I will organize a marathon,” Limpole said.

Limpolls collected just over 6000 euros, says Marlís Vanderbogen of the University of Levin after traveling about a third of the distance.

Limpoles recalls that people contracted the disease during the Spanish influenza pandemic in 1957 and 1958, but they were recovering faster than those infected with the emerging coronavirus in recent months.

Lake City Police, FDLE is investigating the death of a woman

A mother and three children are found dead in a house fire in North...