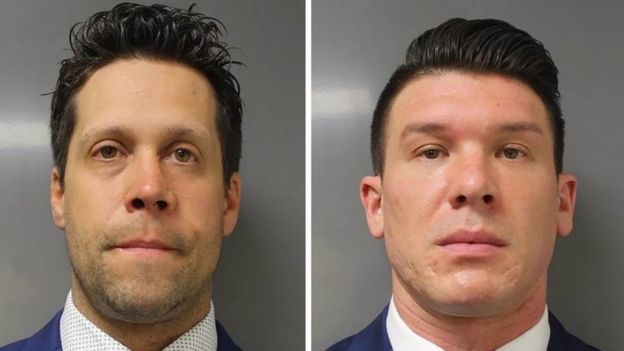 Two members of the US police are facing charges of second-degree physical assault, after they appeared in a video of an elderly man, which resulted in severe injury.

Aaron Turgalski, 39, and Robert Maccabi, 32, denied the accusations. They were released without bail, but they face a seven-year prison sentence if convicted.

On Thursday, the two policemen were seen in the Buffalo area of ​​New York pushing Martin Guengo, 75, who fell on the sidewalk and suffered bleeding. The latter was transferred to the hospital in a critical but stable condition.

The policemen were enforcing the curfew imposed in the city following the protests that broke out since the killing of George Floyd.

They were suspended from work in the emergency response unit after the video, which showed the accident, had become widespread.

In response to the police arrests, 57 colleagues – the entire unit – resigned from their colleagues.

More than a hundred people outside the court, including officers, police and firefighters, demonstrated against the police charge of assault.

“The two defendants pushed the Buffalo Police into a demonstration, which caused him to fall and his head hit the sidewalk and affirmed that he did not take sides in the case,” John Flynn, the district attorney general of Erie said in a statement.

“When I have to sue one of my colleagues, this does not help the situation,” Flynn said

He added that the evacuation orders from the field did not specify the age, and said, “The two policemen were simply doing their job. I don’t know how much friction happened. In my estimation, it slipped and fell back.”

New York State Governor Andrew Kyomo said Friday that the two policemen should be fired and called for an investigation into possible criminal charges.

We can confirm that there are contingency plans to continue police services and maintain public safety in our community,” said Buffalo Mayor Byron Brown.

North Carolina woman dies after being shot, hit by a car