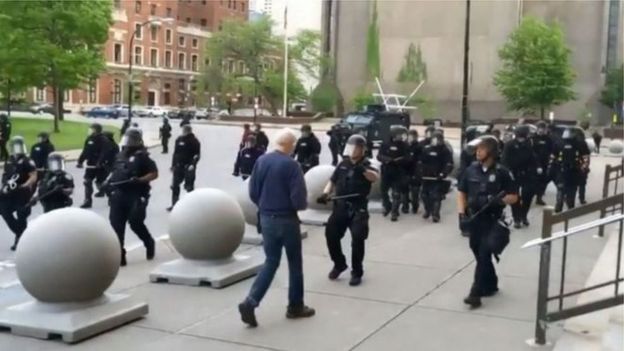 The Philadelphia Police had arrested the protesting student, held him for more than 24 hours, and referred him to the trial prosecutor. However, after the plaintiffs reviewed the facts, they refused to charge the student and charged the inspector instead.

A Philadelphia police inspector faces charges after prosecutors said he appeared in a video clip of a student demonstrator beating his head with a metal club.

Larry Krasner, the Attorney General in Philadelphia, announced that Inspector Joseph Bulogna faces charges of assault, possession of a crime tool, and risking another person at risk.

Prosecutors say that Pologna’s video was filmed on the mobile phone attacking a University student, hitting him in the back of his head while participating in a massive demonstration

The Krasner office said the unidentified student had suffered “severe physical injuries, including a severe head injury, that required hospitalization while in detention.

We try to be fair, accountability must be equal,” Krasner said, in comments reported by US media. “This moment requires a swift and balanced response to violence and criminal acts based on facts and evidence.

This comes after being charged with second-degree physical assault of two US policemen, after they appeared in a video pushing an elderly man, which caused him severe injuries.

Aaron Turgalski, 39, and Robert Maccabi, 32, denied the accusations. They were released without bail, but they face a seven-year prison sentence if convicted.

On Thursday, the two policemen were seen in the Buffalo area of ​​New York pushing Martin Guengo, 75, who fell on the sidewalk and suffered bleeding. The latter was transferred to the hospital in a critical but stable condition.

The policemen were enforcing the curfew imposed in the city following the protests that broke out since the killing of George Floyd.

They were suspended from work in the emergency response unit after the video, which showed the accident, had become widespread.

In response to the police arrests, 57 colleagues – the entire unit – resigned from their colleagues.

On Saturday, more than a hundred people outside the court, including officers, police and firefighters, demonstrated against the police charge of assault.

New York State Governor Andrew Kyomo said Friday that the two policemen should be fired and called for an investigation into possible criminal charges.

The death of George Floyd has reignited the debate about police brutality in dealing with ethnic minorities in the United States.

Data published by the Washington Post show that 1,014 black people were killed by the police in 2019. Several studies show that black Americans are more likely to be police victims than other races.

In a study conducted by the non-governmental organization, Mapping Police Violence, blacks are killed by the police, three times more than whites.

Police brutality spurred reactions such as the “Black Life #BlackLivesMatter Mission” that started in 2013, and has received public support from some celebrities, including singer Beyoncé, and basketball star Lebron James.

Soccer-loving Pope Francis gets a new toy: a foosball table