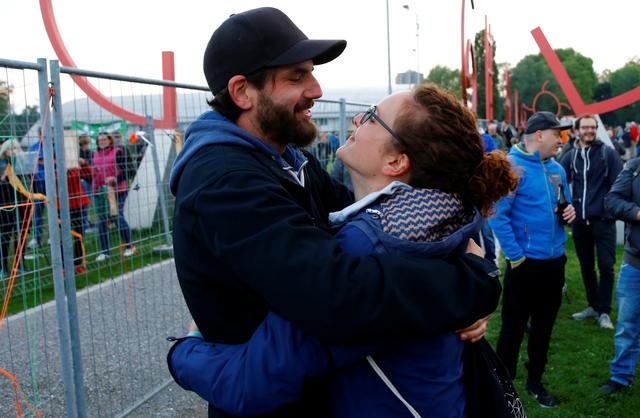 Lucas lives in Switzerland, and his beloved Leoni lives in Germany. This did not mean anything for the lovers before the appearance of the Corona virus, but, suddenly, the authorities erected a fence between them and issued orders to keep each other away.

Workers began to demolish the fence between the German city of Constance and the Swiss city of Kreuzlingen, that fence that became a symbol of the divisions the pandemic left when it was hastily erected to close the border.

For weeks, the two lovers met, exchanging looks across the buffer zone at the border. But after Switzerland and Germany agreed to open the border, the fence was to be brought down by midnight.

He added that she is somewhat annoyed, and in fact she is very annoyed. She is smiling to me now on the other side of the border and when they finally cross the border, they will go out together and have a meal, if time permits, then they spend the weekend together

In normal times, on a continent where borders have gradually faded, people can walk, bike or even swim between neighboring towns on the shores of the lake.

But in mid-March, the German police erected a fence on its side of the border along the line through which the barbed wire barrier between the two countries was passing during World War II.

A person plastered a satirical banner on the fence with a quotation from the Communist leader of East Germany before the construction of the Berlin Wall in 1961, saying no one intended to build a wall.

2 dead after truck overturns, is hit by vehicle in Michigan

A woman is killed when an SUV collides through the fence, down a hill