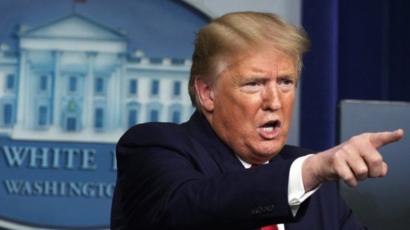 US President Donald Trump has decided to mobilize the military to distribute a vaccine against the emerging coronavirus when it becomes available and focus first on older Americans.

We know that giving this vaccine a huge task, “Trump said in a television interview.” The army is now being mobilized so that at the end of the year we will be able to give it to many very quickly. “

He added that he believed that there would be a vaccine by the end of the year and that the United States was mobilizing our army and other forces based on that assumption.

The White House has set a goal of providing 300 million doses of vaccine by the end of 2020. No vaccine has been approved for the virus, but a number of them are being developed, and the production and distribution of an effective vaccine is an important step for the advancement of the US economy.

Trump’s schedule is inconsistent with that announced by the country’s chief infectious disease expert in testimony in the Senate.

The idea of ​​a vaccine being available by next fall, when schools and universities will resume their classes, is an overly ambitious idea, said Anthony Fauchi, director of the National Institute of Allergy and Infectious Diseases.

A Louisiana man killed his wife in a murder and committed suicide days after...

2,700-year-old toilet found in Jerusalem was a rare luxury