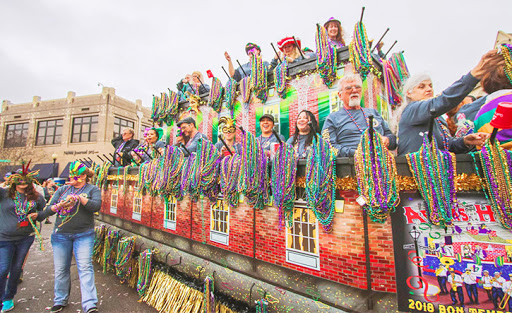 The annual Pensacola Mardi Gras celebration is among the oldest in the United States, dating back to 1874.

The traditional holiday began as a time to prepare for Lent, where households would binge on all the meat, cheese and other foods forbidden during the fasting period.

Since its origination in the United States, the celebration has evolved to include the colorful costumes, dancing, floats, parades, and the throwing of trinkets and beads we see today. However, in Pensacola the season isn’t just beads and moon pies. Though many traditions may have been lost over time revelers have developed new traditions with each passing season.

Pensacola hosts one of the largest celebrations in the United States. Beginning on Twelfth night and ending Fat Tuesday, the city hosts several different parades to include the Marching Madness Parade, Downtown Illuminated Parade, Grand Parade and Beach Parade.

There is even a Boat parade on Perdido Key.

In addition to the parades, the local mall is transformed into a ballroom for the Annual Mall Ball. Mardi Gras luncheons, dinners, krewe balls and parties are everywhere during the season and even pets can participate in the Kid and Kritter Krawl.

There is an event for everyone at anytime, but catching beads is just the start.

In addition to the fun at the parades and social events many Pensacola Krewes give back to the community.

Some of the events during the season include the Pensacola Sertoma Club Great American Chili Cook Off, where krewes compete for bragging rights and all money raised goes to the club which provides medical assistance to needy families.

One krewe, Le Krewe Du Brew, is a five year veteran of Pensacola Mardi Gras. Le Krewe Du Brew – The Champagne of Krewes, founded in 2007, is a social krewe of family and friends who enjoy coming up with a new fresh theme every year to unveil at the Grand parade.

Le Krewe Du Brew holds and participates in several events throughout the year including the Chili Cook-off, parades, Fun Run and more.

The goal of this krewe, as well as many others, is not just to have fun but also to give back to the local community both during the Mardi Gras season as well as throughout the year and continue this grand celebration.

While Le Krewe du Brew is just one of many area krewes participating in all that Pensacola has to offer there are many other options for participation in the festivities.

The Pensacola Mardi gras season has so much more to offer than just those beads and moon pies!

Urias expected to start for the Dodgers against the Cubs