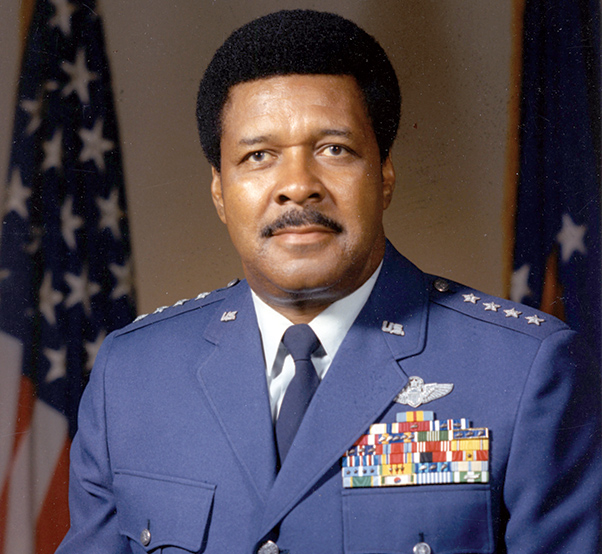 Daniel Chappie James Jr. February 11, 1920 – February 25, 1978 was an American fighter pilot in the U.S. Air Force, who in 1975 became the first African American to reach the rank of four-star general in the armed forces.

ames continued civilian pilot training under the government-sponsored Civilian Pilot Training Program. He then enlisted in the Aviation Cadet Program of the U.S. Army Air Forces on January 18, 1943, receiving his commission as a 2d Lt and pilot wings at Tuskegee Army Airfield, Alabama, on July 28, 1943.

He remained at Tuskegee as a civilian instructor pilot in the Army Air Corps later that July.

Throughout the remainder of the war James trained pilots for the all-black 99th Pursuit Squadron.

After completing P-40 Warhawk training and then B-25 Mitchell training, James served as a B-25 pilot with the 617th Bomb Squadron of the 477th Bomb Group at Godman Army Airfield and then at Lockbourne Army Airfield from January 1944 till the end of the war.

He did not see combat himself until the Korean War.

On August 15, 1954, he appeared as a contestant on the game show what’s My Line? He graduated from the Air Command and Staff College in June 1957.

James next was assigned to Headquarters U.S. Air Force as a staff officer in the Air Defense Division of the Office of the Deputy Chief of Staff for Operations. In July 1960 he was transferred to RAF Bentwaters in England, where he served successively as assistant director of operations and then director of operations, 81st Tactical Fighter Wing; commander, 92nd Tactical Fighter Squadron; and deputy commander for operations for the 81st Wing.

In September 1964, James was transferred to Davis-Monthan Air Force Base, Arizona, where he was director of operations training and later deputy commander for operations for the 4453rd Combat Crew Training Wing.

Both in their mid-40s, they formed a legendary team nicknamed “Blackman and Robin.

James flew 78 combat missions into North Vietnam, many in the Hanoi/Haiphong area, and led a flight in the “Operation Bolo” MiG sweep in which seven Communist MiG-21s were destroyed, the highest total kill of any mission during the Vietnam War.

He was named vice commander of the 33rd TFW at Eglin Air Force Base, Florida, in December 1967. While stationed at Eglin, the Florida State Jaycees named James as Florida’s “Outstanding American of the Year” for 1969, and he received the Jaycee Distinguished Service Award. He was transferred to Wheelus Air Base in the Libyan Arab Republic in August 1969 as Commander of the 7272nd Fighter Training Wing.

Following the coup engineered by radical Libyan officers, including Mohammar Qaddafi, James had a tense standoff with the militants in the late stages of turning Wheelus over to the Libyans.

James was determined not to be pushed off the base early, but Qaddafi and his followers began pushing the Americans to see how far they could go and at one point “ran a column of half-tracks through the base housing area at full speed. Following this escalation, James closed the gates of the base.

Qaddafi arrived at the gate and while talking to James moved his hand over to his pistol holster to which James replied: I told him to move his hand away.

If he had pulled that gun, his hand would have never cleared the holster.

On September 1, 1975, James was promoted to the four-star rank of general (O-10) and assigned as commander in chief of NORAD/ADCOM at Peterson Air Force Base, Colorado.

In these dual capacities he had operational command of all United States and Canadian strategic aerospace defense forces. On December 6, 1977, he assumed duty as special assistant to the Chief of Staff, U.S. Air Force.

James was widely known for his speeches on Americanism and patriotism, for which he was editorialized in numerous national and international publications.

When asked his views on the growing civil rights movement after having to make an emergency landing in North Vietnam, he answered, Look, friend, I’m really not interested in all of that, really. See I consider myself damned lucky to have been able to land my airplane at this emergency strip in one piece.” Being asked about militants like H. Rap Brown and Stokely Carmichael, who implied that blacks ought to fight at home rather than in Vietnam, also angered James, with his stating the lawlessness, rioting, and men like Stokely Carmichael acting as if they speak for the Negro people. They aren’t, and set civil rights back 100 years!

James even removed his Black Panther emblem from his helmet since it had become associated with a movement he no longer identified with. Excerpts from some of the speeches have been read into the Congressional Record.

The statements by James in which he repudiated the most militant point of view endeared him to concerned whites, including President Johnson, who invited him to a White House reception. Immediately after the murder of Dr. Martin Luther King Jr., and as riots erupted in several areas across the country, James addressed a gathering of Air Force Association officers at which he declared that in spite of events and the resistance to progress, I’m not disgusted-I’m a citizen of the United States of America and I’m no second-class citizen either and no man here is, unless he thinks like one and reasons like one and performs like one.

This is my country and I believe in her, and I will serve her, and I’ll contribute to her welfare whenever and however I can.

If she has any ills, I’ll stand by her until in God’s given time, through her wisdom and her consideration for the welfare of the entire nation, she will put them right.

He was awarded the George Washington Freedom Foundation Medal in both 1967 and 1968.

His citation read fighter pilot with a magnificent record, public speaker, and eloquent spokesman for the American Dream we so rarely achieve.

He was buried with full military honors at Arlington National Cemetery.

He was survived by his wife, Dorothy Watkins James, their daughter, Danice Berry, and two sons, Daniel James III and Claude James.

His wife Dorothy died in 2000 and is buried with him in Arlington.

Multiple shootings are under investigation by Columbus Police