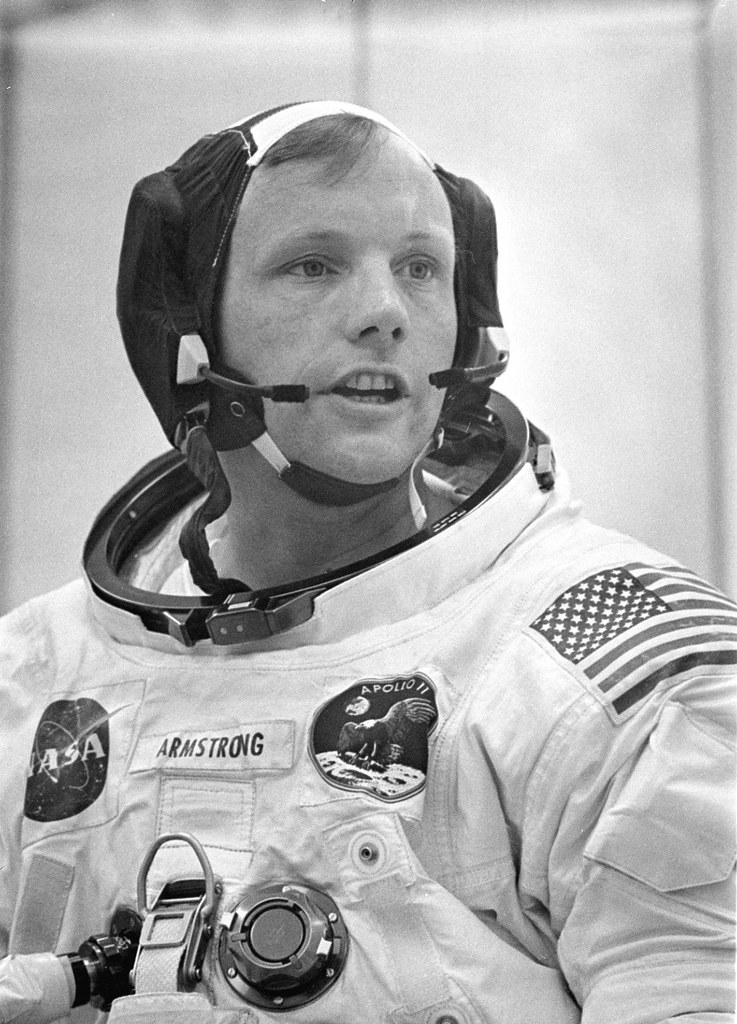 Armstrong joined the US space agency as a research pilot pilot at Lewis Laboratory in California, and ex officio participated in 200 flights in various types of aircraft.

In the year 1962 AD he was promoted to the position of astronaut, where he worked as commander of the Jimini flight, and Armstrong served in the American army and participated in the Korean War in 1950 AD and made the first successful battle between two spacecraft in space.

On the first spacecraft for Armstrong he drove Jimini 8 in 1966. During this mission, along with David Scott, he made the first human space spacecraft.

Armstrong also led the crew of the Apollo 11 flight in which he landed on the moon with Buzz Aldrin on July 21, 1969 AD. This was his second trip and was the first person in the history of mankind to set foot on the moon.

During this journey, which Armstrong described as a giant step for humankind, he and Buzz Aldrin landed on the moon and spent two and a half hours exploring the place while Michael Collins orbited the orbit in orbit around the moon.

The US space agency NASA has devoted huge resources to a program later known as Apollo, 400,000 people worked on 17 Apollo missions with a budget of $ 25 billion and three astronauts were chosen for the Apollo 11 mission – Buzz Aldern, Neil Armstrong and Michael Collins.

The lunar command vehicle and lunar module, which will land on the moon, are placed on a powerful missile known as the Sturn 5

The plan was to use the Earth’s orbit to reach the moon’s orbit. After that, Aldrin and Armstrong board the lunar module and land on the moon, while Collins remains behind them in the driving vehicle.

Neil Armstrong was rewarded with both Aldrin and Collins Presidential Medal of Freedom by President Richard Nixon.

In 1978, President Jimmy Carter awarded Neil Armstrong the Congressional Space Medal of Honor, and in 2009 he and his two comrades received the Congressional Gold Medal and in 2010 US President Barack Obama visited the Kennedy Space Research Center to explain NASA’s strategy that was attacked, as Neil Armstrong described it. Apollo 11 flight commander and other astronauts as a setback will make the agency’s program dependent on Russia’s goodwill.

Armstrong died at the age of 82 in a hospital in Ohio after undergoing coronary artery surgery on August 25, 2012 and the family of American astronaut Neil Armstrong received 5.38 million euros under a settlement after a lawsuit was filed against the hospital administration in which he performed a heart surgery He died in its wake.

In August 2012, Armstrong had an open-heart operation at Mercy Health Fairfield Hospital in Ohio, and after the operation the astronaut died of a relapse caused by complications related to surgery.

It was that the Armstrong family had filed a lawsuit accusing the hospital of not providing the patient with the required care, which led to his death.

In 2014, a settlement was reached to close the case between the aforementioned hospital and 10 members of the astronaut’s family; his two sons, sister, brother, and six grandchildren, according to documents filed with the Hamilton County Court in Cincinnati, Ohio.

1 dead after race car crashes into crowd at Georgia track