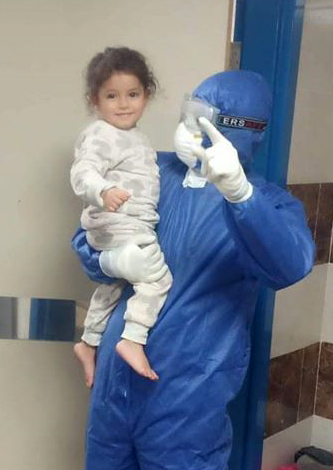 Inside the Qaha Hospital in Egypt and inside the sanitary isolation from the Corona epidemic the youngest child infected with the Corona virus lies and spends most of her day with Nurse May Al Mansi dancing and singing the famous children’s song.

And the hospital published on its official page, a video in which the nurse appeared singing and dancing the child to the famous song with the aim of introducing joy to it, and the hospital commented on the video with the phrase there is a sweet need. That’s famous Egyptians told means the life have good and sweet things when the life becomes hard.

Mayi Mansi, a hospital nurse, revealed that working with injured children is the most difficult for all the medical team, and that she was in the hospital dealing with a number of injured children, including those who came with their families, noting that the classification of the health status of each child determines if he continues In the same place with his parents or isolated in another room.

She explained that separating children from their children is a very difficult step on both sides, for this the medical team works to relieve children, spread an atmosphere of fun and joy among them, and provide foods they like, such as chocolate and sweets, as we play with them, but unfortunately there are also cases of injury among children Without their families, and they are taken alone to the hospital, and here we constantly communicate with their families to reassure them, confirming that they are very happy to participate in this national epic to combat the Corona virus, and that this is a national role for all doctors, nurses and workers in the medical system.

Dr. Suad Hatta, Deputy Director of the hospital, confirmed that the medical team is one family and treat patients from this logic, noting that the number of people recovering from the hospital’s Corona Virus increased to 75 cases after 10 new cases were discharged yesterday, out of a total of 111 cases received by the hospital, of whom only 3 died.

Sunday Forecast: Mild and dry weather continues with temps in the low 80s