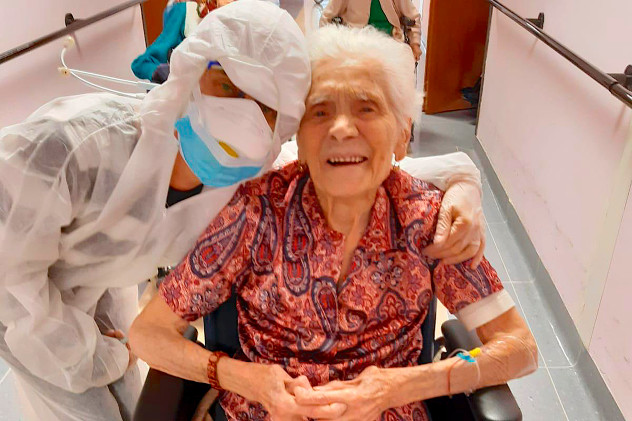 Since the coronavirus outbreak erupted and escalated into a global pandemic, one troubling aspect of the crisis is how unforgiving the COVID-19 illness is for the older population.

Seniors are especially vulnerable to the withering respiratory illness and, indeed, many have succumbed. But among the more than 500,000 and counting who have recovered from COVID-19 worldwide are some inspiring souls — people who have lived through world wars and other devastating pandemics. They are true survivors who didn’t let their advanced age stand as an impediment to conquering the terrible disease.

In these times, when the news is dominated by headlines heralding rising infection rates, fatalities and economic disaster, it’s necessary, even therapeutic, to pause and celebrate the folks who have overcome the illness sometimes against all odds.

They are the ray of sunshine amid the storm, the rainbow afterward. These are some of their stories.

Titchen, from Birmingham, England, is believed to be the oldest patient in the United Kingdom to beat the virus, according to the country’s National Health Service (NHS).

Titchen, born in September 1913, said she felt “very lucky” to survive COVID-19 and couldn’t wait to see her family upon being released from the hospital. She was a 4-year-old when the Spanish flu pandemic erupted in early 1918 and had turned 5 when the outbreak went through its deadly second wave later that year.

Spanish flu killed tens of millions around the world.

The resilience of centenarians in the face of the deadly disease has been one of the most inspiring storylines to emerge from the pandemic. And Titchen is hardly alone in having reached triple digits and beaten the new coronavirus.

Another inspiring recovery story emerged from Italy, one of the pandemic’s worst-hit countries.

Ada Zanusso, 103, completed her recovery, and, in an interview with the, downplayed having overcome the illness, saying “I had some fever.”

What got her through the ordeal? Zanusso said she defeated COVID-19 with three things she’s relied upon throughout her more than a century of living: courage and strength and faith.

Zanusso suffered from a fever and remained in bed for a week, while her family physician of 35 years cared for her.

“We hydrated her because she wasn’t eating, and then we thought she wasn’t going to make it because she was always drowsy and not reacting,” her doctor, Carla Furno Marchese,  said One day, she opened her eyes again and resumed doing what she used to before.

In Italy, more than 21,000 deaths have been blamed on COVID-19 and total cases have topped 165,000 as of this writing, according to Johns Hopkins University. Watch a portion of her interview here.

Another of the world’s oldest survivors of the coronavirus celebrated his 104th birthday and a clean bill of health all while maintaining proper social distancing in Lebanon, Oregon, early in April.

Bill Lapschies, a World War II veteran who was stationed in the Aleutian Islands during the war, also lived through the 1918 Spanish flu pandemic, according to Oregon Public Broadcasting.

The outlook for Lapschies also was bleak early on in March when he tested positive for COVID-19. “We all thought, ‘He’s 103. What are the odds he’s going to come out of this?'” Jamie Yutzie, his granddaughter, said in an interview with The Washington Post.

But he weathered the storm the illness stirred up in his body and ultimately triumphed. When asked how he managed to beat coronavirus, Lapschies answered, “I don’t know.” He paused then added, “It just went away. Sit out here and you can get rid of anything.

Yutzie was more impressed with her grandfather’s recovery than he was. “He should be an inspiration to the world,” she told Oregon Public Broadcasting, fighting back tears. If he can do it, then people need to keep their hopes up.

Cornelia Ras, a 107-year old Dutch woman, also recovered from COVID-19, Reuters reported. Ras beat the brutal respiratory illness after being part of a group of 41 churchgoers who contracted the disease after attending a service back in March. Ras fell sick a day after her 107th birthday on March 17, Since then, at least 12 of those who attended the service died, but Ras was cleared of the disease making her the oldest known person to have recovered from COVID-19.

Not quite a centenarian, but equally as impressive is the story of a British woman named Joyce Goldstraw who beat COVID-19.

Goldstraw, a 97-year-old great-grandmother who served as a corporal in Britain’s Women’s Royal Air Force during the Second World War beat the coronavirus, came down with COVID-19 in mid-March, according to ITV News. By the end of the first week in April, she’d overcome the sickness.

Goldstraw recalled that she “coughed a bit, but that’s all.

A widow of 21 years, Joyce has two children who kept close contact with the NHS to monitor her health while she had the virus. After recovering from the coronavirus, Joyce returned home, safe and well. Her two children, six grandchildren and seven great-grandchildren were so proud of Joyce’s strength that they have already started planning her 100th birthday.

She pulls herself together and gets on with it, that’s her philosophy, her son said.

As for Goldstraw, she said the weather would dictate when she starts getting out and about again.

If it warms up,” Goldstraw remarked, and then I shall be able to go out. But I’m not going out while it’s very cold to catch another cold or something.

swimmer dies after being attacked by 15-foot shark